Agahnim is the mini-boss of Dancing Dragon Dungeon, the fourth dungeon in The Legend of Zelda: Oracle of Seasons. It is unknown whether this mini-boss is connected to the character Agahnim from The Legend of Zelda: A Link to the Past. The two look somewhat similar and share the same name and attack method; however, the strategy used to defeat each character is different.

When the battle begins, Agahnim will split into three copies, one being the "real" Agahanim and the other two being transparent copies. He then attacks by firing balls of magic at Link. In order to see which copy is the "real" Agahnim, both torches in the room must be lit. Link can then tell the difference between the clones. The real Agahnim is the one that has a shadow. Link can damage the non-transparent Agahnim with his sword. Agahnim is defeated after several repetitions of this technique. 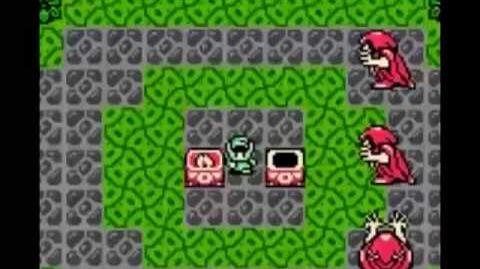 Retrieved from "https://zelda-archive.fandom.com/wiki/Agahnim_(Oracle_of_Seasons)?oldid=479474"
Community content is available under CC-BY-SA unless otherwise noted.