Zeldapedia
Register
Don't have an account?
Sign In
Advertisement
in: Ancient Robots, The Legend of Zelda: Skyward Sword races
English

The Ancient Robots are a race in The Legend of Zelda: Skyward Sword. They are mechanical creatures found primarily throughout the Lanayru Desert. Centuries prior to the events of the game, these robots performed tasks for the people living in the region. However, after Demise attacked the surface and forced Hylia to relocate the Hylians to the sky, the Ancient Robots unified with the remaining races to defeat and seal away Demise. Since then, they have fallen into decay and their remains litter the Lanayru Mining Facility. However, the Timeshift Stones they used to harvest can restore the long inactive robots to working condition when they are activated. According to the group of Ancient Robots located in Lanayru Gorge, they serve under the Thunder Dragon Lanayru, referring to him as 'Master'. They also possess a great deal of strength, presumably to use for manual labor.

There are two known "types" of Ancient Robots. The first is the LD-301 series, which composes the majority of the robots seen in the game. The LD-301 series wear three-pronged helmets, and have disembodied hands apparently connected by strands of electricity, they also have oval-shaped, pale yellow bodies. The majority of these only appear in the radius of effect around Timeshift Stones.

According to Gondo's Grandfather (who passed this information down to Gondo), LD-301 Ancient Robots apparently use extract from the roots of the Ancient Flowers that once grew in Lanayru Province in the past as a source of oil to maintain functionally and it was lack of these Flowers in Skyloft that lead to LD-301S Scrapper breaking down and presumably the lack of Ancient Flowers in present day Lanayru Desert is the reason why LD-301 series robots no longer function in the present day, due to the loss of Ancient Flowers and their precious oil. As shown with the case of Scrapper, it is possible to use an Ancient Flower obtained from the past via Timeshift Stones to repair them, allowing the Robots to function in the present.

Interestingly, some of the LD-301 Robot miners in Lanayru Mine appear to be equipped with specially designed Digging Mitts (three sword-like claws on each finger) which they use to dig for Timeshift Stones. Also occasionally broken down Ancient Robots in the present will produce Rupees if Link hits them with the Gust Bellows.

The second is the LD-00 series, which contains both LD-002G Scervo and LD-003K Dreadfuse, who are both large humanoids that vaguely resemble Stalfos. Scervo and Dreadfuse are the only Ancient Robots that are fully functional in the present day, without having been repaired. Presumably they do not require oil from Ancient Flowers in order to maintain functionality.

The "LD-" prefix found in each Ancient Robot's name likely denotes the fact that they are found only in the Lanayru Desert, with the numbers indicating the series. Oddly, Lanayru Desert wasn't a desert when the robots were created, and therefore was not called Lanayru Desert. 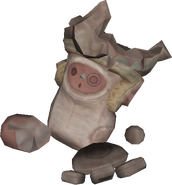 An Ancient Robot after many years of deactivation
Español Português do Brasil
Community content is available under CC-BY-SA unless otherwise noted.
Advertisement