Zeldapedia
Register
Don't have an account?
Sign In
Advertisement
in: Dragons, The Legend of Zelda: Oracle of Seasons bosses
English

Aquamentus (アクオメンタス, Akuomentasu?) is the boss of the Gnarled Root Dungeon, the first dungeon in The Legend of Zelda: Oracle of Seasons. It is depicted as a large, green, horned dragon with small wings.

Aquamentus attacks by breathing fireballs at Link, as well as by charging him in an attempt to spear him with its horn. Ironically, Aquamentus' weak spot is also its horn, forcing Link to dodge its attacks while attempting to strike its horn with his sword. Once the horn is destroyed, Aquamentus itself is defeated, and Link will be rewarded with a Heart Container and the Fertile Soil. This boss is unlike most of the other bosses in its game, as while the other bosses can (and often must) be fought in some way by using the item found in their respective dungeons, the Gnarled Root Dungeon's item, the Seed Satchel, is of no use against Aquamentus. 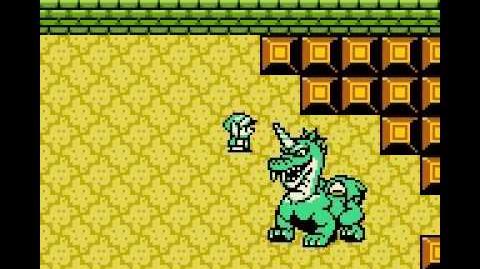