Aquamentus attacks by spitting three energy balls at a time towards Link. These can be blocked with the Magical Shield. Aquamentus can be damaged if struck in the head with a sword, Sword Beam, bomb or boomerang. It can also be hurt by an arrow, which it is weak to. 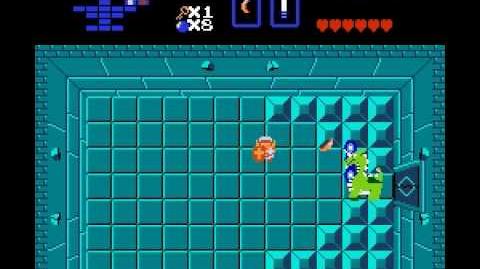 Aquamentus only appears once in the animated series, in the episode "Underworld Connections". The Triforce of Wisdom has been split into three pieces, and an Aquamentus ends up with one of them. It was depicted as being aquatic.

The Legend of Zelda Game Watch

Aquamentus appears as the boss of every dungeon. To defeat him, Link must collect a bomb and place it in front of Aquamentus. If he succeeds, a Triforce fragment appears, which allows access to the next dungeon.

Retrieved from "https://zelda-archive.fandom.com/wiki/Aquamentus_(The_Legend_of_Zelda)?oldid=535538"
Community content is available under CC-BY-SA unless otherwise noted.