"Ooh, goodness... Brave adventurer, you won't believe it! There's a dragon raging outside the city walls... Ooh, I'm terribly worried about everyone... I'm going to check in that shop for survivors!"
— Ooccoo

Twilit Dragon, Argorok (覚醒炎翼竜 ナルドブレア, Kakusei Enyokuryū Narudoburea?, Awakening Flame Winged Dragon Nardobrear) is the boss of the City in the Sky, the seventh dungeon in The Legend of Zelda: Twilight Princess. Argorok is a massive dragon that resides in the skies over Hyrule. At one point, it attacks the City in the Sky, home of the Oocca.

Argorok is engaged at the very top of the City in the Sky. Link must fight it while withstanding the severe wind and rainstorm that plagues the area. In the first phase, Argorok attacks by diving at Link or flapping its huge wings to create a gale. To complete the first phase of the battle, Link must use the Double Clawshots to climb the pillars around the battle area and attach himself onto its tail and then use the Iron Boots to cause the weight of it to bring Argorok to the ground, the resulting impact removing a layer of its protective armor, tho Link should not stay at that pillar too long, or else Argorok will fly towards Link and will spew out fire at him in point-blank range. After Link repeats the aforementioned strategy twice, the remainder of Argorok's armor falls off, and the second phase of the battle begins.

A heavy rain begins, watering several Peahats which come out of the ground and fly around the top of the arena, allowing Link to use his Double Clawshots to transport himself in a circle. Once Argorok starts breathing fire, Link can travel around Argorok in order to clawshot himself to an orb transfixed to the creature's back, presumably the Dragon's power source. He must then attack Argorok with his sword. When Link attempts to do this the third time, Argorok recovers. Link must be cautious and prepared to Clawshot in the opposite direction, because at this point, Argorok may switch directions when breathing fire. After he repeats this process three times, Argorok spurts out fire, and will try to fly away, but, having been weakened and wounded by the battle, falls and explodes in midair, allowing Link to obtain the final shard of the Mirror of Twilight. 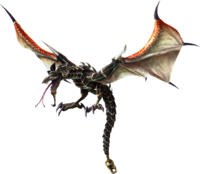 Argorok appears in Hyrule Warriors as a Giant Boss. It attacks by swooping down on enemies, conjuring tornadoes with its wings, and breathing fire. Normally out of range of most attacks, it can be brought down from the sky by using the Hookshot when its tail glows blue (usually during its fire breath or after its tornado attack), leaving its Weak Point vulnerable.

In the story, Argorok first appears at the Palace of Twilight, summoned by Zant to help protect the Gate of Souls. Initially, it flies out of reach, even for the Hookshot, and bombards the allied base with fireballs, its mere presence clearing the Hyrulean Army out of any keep it flies over. To stop the assault, Midna must reclaim the keep beneath Argorok, allowing Lana to create a Magic Circle that she can use to bind Argorok - the dragon quickly breaks free, but the strain forces it to fall back for a while. After thwarting Argorok twice, Lana must secure the Fairy Fountain and enlist the Great Fairy's help in bringing the dragon down long enough to be fought normally. However the dragon proves to be quite resilient and the Great Fairy is forced to use one of the chains generated by the magic circle pull down the Moon on Argorok, which is hit in the back by the Moon's nose and the force of the blow is enough to weaken Argorok, finally giving the allied forces the chance to first it off.

A pair of Argoroks appear in Hyrule Field after Ganondorf corrupts it into Ganon's Tower with the full power of the Triforce. Although the dragons are slightly weaker than the one fought in the Palace of Twilight, they have ample support from Ganondorf's army of monsters, and serve as only the first obstacle the Hyrulean Army must overcome in their final battle against the Demon King. 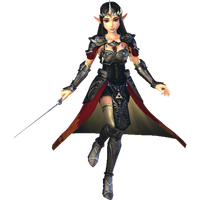 Lana summons a slightly smaller Argorok during one of her combos in her Summoning Gate moveset and can ride it as part of a combo.

In Ganon's Fury, Argoroks drop the Burning Breath Boss Attack Item and can be put into a downed state (exposing its weak point) with a Fireball. As part of the Boss Pack DLC, Princess Zelda has an unlockable Argorok Recolor of her Standard Robes (Boss).

Argorok returns as a Giant Boss and plays much the same it did in Hyrule Warriors. However unlike Hyrule Warriors, he automatically falls when his glowing blue tail is hit with either the Hookshot/Clawshot, as the struggle animation used in Hyrule Warriors was removed (however this makes battles with Argorok easier).

Argorok is likely derived from kargoroc, a smaller dragon-like enemy in the game. This may imply that Argorok is a regular Kargaroc mutated by the mirror shard. The first part of its name, Argo-, may also pay tribute to the Ancient Greeks, whose architecture is similar to that of the City in the Sky. 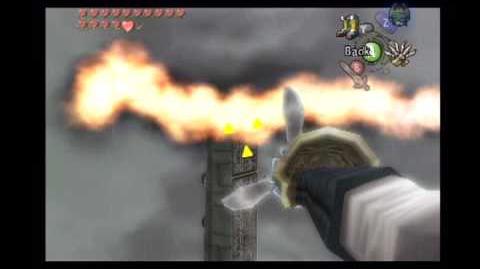