Twilit Arachnid, Armogohma (覚醒甲殻眼 シェルドゴーマ, Kakusei Kōkaku Me Sherudo Gōma?, Awakening Large Crustaceous Eye Shelled Gohma) is the boss of the Temple of Time, the sixth dungeon in The Legend of Zelda: Twilight Princess. Armogohma is a giant tarantula, with a single eyeball on its thorax encased in an armored exoskeleton. Armogohma's true form is a small spider with an eyeball design on its abdomen. Armogohma bears a similar name and attack set (aside from its beam attack) to Queen Gohma in Ocarina of Time.

The original design for Armogohma is known as Beta Gohma. In the trailer for a fictional live-action The Legend of Zelda movie, one quick scene shows Link facing Armogohma for the first time.

In The Legend of Zelda: Twilight Princess Trading Card Deck, it confirms Armogohma is female, another similarity it shares with Queen Gohma.

In the beginning of the battle, Armogohma will be crawling on the ceiling. To defeat Armogohma, Link must wait until she stops moving to shoot her beam attacks that is similar to that of Beamos, during which he must fire an arrow into her "eye". When she falls to the floor, Link must take control of the nearest statue with the Dominion Rod to attack her. When Armogohma gets up, she spawns numerous Baby Gohma to attack Link. She then crawls back up on the ceiling, and the process repeats. After a few repetitions, Armogohma's armor will be destroyed.

After her armor has been destroyed, Armogohma will run around with the Baby Gohma and attempt to escape. Link must either chase down the real Armogohma and slash it with his sword, or simply shoot its abdomen with an arrow three times. Three alternative methods to kill Armogohma's true from in one strike is to: use one of the statues, shoot a Bomb Arrow at it, or hit it once with the Ball and Chain. 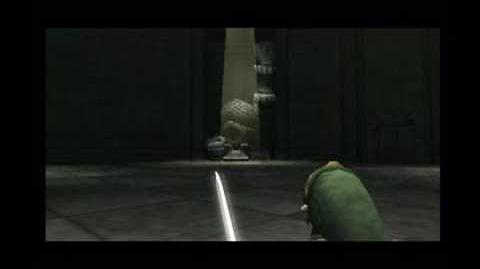 Some believe that Armogohma was once an ordinary Gohma (if not undersized, based on its true form) that came into contact with the Mirror Shard, causing it to mutate into a much larger, armored form, similar to Yeta becoming Blizzeta.

It is possible that Armogohma is or is related to Queen Gohma from the Ocarina of Time, as both are large arachnids that crawl on the floor and ceiling. They also both drop smaller Gohmas for Link to fight. Also both are female Gohmas. Given the fact it is female it's possible that the Baby Gohmas it drops, and the Young Gohmas encountered in the temple, are its offspring.

The name Armogohma is a portmanteau of armor and Gohma, a recurring boss in the Legend of Zelda series. Armo may also stand for Armos, recurring mechanical constructs also seen throughout the series.

Armogohma's Eye viewed from the back