"These small statues shift into autopilot and attack prey. Shoot them in the eyes with an arrow to silence them, then destroy them by hacking their crystal backs."
— Figurine

Armos appear mainly near Death Mountain and east Hyrule, where they are covered in orange and green armor, respectively. Also, several Armos near Level 6 feature a unique white-colored armor. An Armos will remain motionless until Link touches it, at which point it will move around the area. Certain Armos move quickly while others move slowly. They occasionally cover up hidden staircases that can be revealed by touching the Armos to cause it to move. The Power Bracelet is also hidden in this manner, beneath an Armos in the midwestern portion of Death Mountain's base. Armos take three hits with the Wooden Sword to defeat, and deal one heart of damage to Link if he is not wearing a ring.

Armos are found near the Eastern Palace. They stand dormant until approached, at which point they awaken and bounce towards Link. Inactive Armos are gray, and change to light brown when awakened. Six Armos Knights serve as the boss of the Eastern Palace and the mini-boss of Ganon's Tower.

Several Armos and a single Armos Knight appear in the Face Shrine region. The Armos are similar to those from The Legend of Zelda, though they move more slowly. They are invulnerable to the sword, but can be defeated with a bomb, the bow or the boomerang. They always drop arrows when defeated. They often hide among similar-looking statues. Rows of statues resembling Armos form a maze in the Ancient Ruins, but only a few are actually enemies. Each wall has one Armos that must be found in order to proceed. Inside, an Armos Knight guards the Face Key.

Armos are found within dungeons. When inactive, they are indiscernible from regular Armos Statues. When Link touches one, it is activated, and will pursue Link until he defeats it or runs outside of its range. Armos' appearances change upon activation, as they gain eye-like marks, show a cracked pattern on their fronts and backs, change color and markings slightly, and lose the Goron Symbol on their foreheads. After taking damage, an Armos will bounce around wildly and then explode.

Armos behave and look exactly the same as those from Link's Awakening, due to Flagship's use of data from that game when developing the Oracle games. They reside in no one specific area, and can only be destroyed with bombs, the Magical Boomerang, and Mystery Seeds. There is a mini-boss in the fourth dungeon of Oracle of Ages named Armos Warrior.

"These small statues shift into autopilot and attack prey. Shoot them in the eyes with an arrow to silence them, then destroy them by hacking their crystal backs."
— Figurine Description 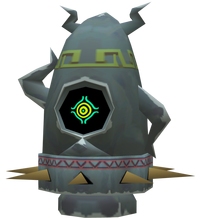 When Link enters a room, or in some cases, sets off a certain trap or completes a puzzle, Armos will activate and hop quickly toward him, trying to hit him with the spikes near their bottom. Link can stun an Armos by shooting an arrow into its single eye, while striking the crystal on its back will cause it to spin around wildly and self-destruct. Some Armos in the Tower of the Gods never activate, but instead serve as weights. If Link manages to get an Armos to fall into an endless abyss in the Tower of the Gods, the Armos will disappear into darkness and then suddenly warp back to its starting place to continue its attack. Armos Knights also appear in the game.

Armos appear in the Desert Temple, Ice Temple, and in Hyrule Castle when visited during the last stage of the level Whereabouts of the Wind. In the castle, a single pair of large Armos can be found, which appear to be ordinary Armos Statues but will awaken once touched. They continually bounce towards Link, and can be damaged with ordinary sword strikes. The Armos found in the Desert Temple look and behave differently. The first group encountered, once awakened, will not move if Link is facing them, and cannot be destroyed. The second group is already active, and continually moves around the room in a circular pattern. These Armos can only be destroyed by lighting every torch in the room. In the Ice Temple, Armos look and behave like those found in Hyrule Castle, but are much smaller.

The Armos in this game were built for the Wind Tribe by the Minish. They are red statues powered by flames inside their heads; only a Minish-sized person can turn the flame off. When Link approaches, Armos activate and quickly run toward him, occasionally pausing. Sometimes Link must activate an Armos to clear a path, and other times he must deactivate one to prevent it from blocking a path. To do this, Link must change into his Minish shape, then climb up an Armos' shield and slash its power switch with his sword. 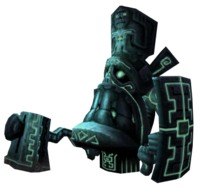 Armos appear as face-like statues wielding shields and hammers. Once the crystal on an Armos' back is slashed three times or hit with the Mortal Draw, it spins around rapidly, swinging its hammer violently before exploding. Three shots from the Hero's Bow or the Clawshot, or a single Bomb Arrow will also defeat an Armos, as will one hammer blow from a statue from the Temple of Time or one hit to the rear from a Ball and Chain. Unlike in other games, Armos do not harm Link when they explode; however, Link should still maintain a safe distance from their frenzied hammer strikes. Armos are found primarily in the Temple of Time and the Cave of Ordeals.

A beta enemy named Armos Titan was not included in the final release of the game.

Armos in this game stop moving instead of exploding when a bomb goes off near them. A stopped Armos can be moved around like a normal statue, and as such can be used to hold Foot Switches down.

Armos do not appear as stand-alone enemies, but are used as mounts for certain Miniblins. Defeating the Miniblin riding on top of an Armos will result in the death of the Armos as well. Link can also use the Whirlwind from atop the shield of a Zelda-possessed Phantom to knock a Miniblin off its Armos mount.

Armos are found in the Lanayru Mining Facility and the Pirate Stronghold. These iterations of the enemy are double-sided, with two different faces. Link must use the Gust Bellows on the spinning device on its head to halt the monster's motion and open its mouth, revealing two jewels which serve as weak points. Depending on which face is facing Link, the attack pattern will vary, but both faces must be defeated in order to destroy the statue. The angry face has a longer jump reach and is more aggressive; this face produces a crystal with a limited port, requiring a stab attack to break. The other face is slightly calmer and possesses the easier crystal, which can be destroyed by any means except an upward vertical slash. When one face is defeated, the other will attack when facing Link. It is advised to take out the angry face first, as its jumping range and aggressiveness make it much harder to use the Gust Bellows on. These Armos' movements are limited to a certain radius from their original points, and in the Lanayru Mining Facility, this territory is marked on the ground.

Several Armos appear in the episode "Sing for the Unicorn". As Link and Zelda journey through the Underworld, Link warns Zelda not to touch the Armos statues. Unfortunately, she accidentally does so, bringing the statue to life, which promptly kicks Link into another statue, which grabs him. After activating yet another statue, Zelda dodges two of the attacking statues and fires an arrow at the one holding Link, freeing him and enabling him to use Sword Beams to defeat the remaining Armos.

Link: The Faces of Evil

One of the weapons Link can purchase is called "Armos Series", and it resembles the ovular shield of stone and short sword of the Armos. If Link uses these, his offense is at 100% and his defense at 70%, making it the second worst weapon at Link's disposal—the first being the Bug-Catching Net with the Hylian Shield. As a side effect, offense increases with Soul Charge, but the Soul Charge effect slowly decreases. It should be noted that the shield has the worst defense of all of Link's weapons.

The Legend of Zelda: A Link to the Past manga

A single Armos is defeated by Link when he lures it into a deep fountain of water in which it drowns. Link and Ganty later find it again at the bottom of the fountain in the Dark World.

Artwork of an Armos from The Legend of Zelda 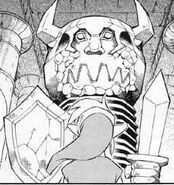 Link confronts an Armos in the manga

An Armos from Skyward Sword
Add a photo to this gallery

Retrieved from "https://zelda-archive.fandom.com/wiki/Armos?oldid=542630"
Community content is available under CC-BY-SA unless otherwise noted.