"They're not fast, but that iron ball is a bruiser! Try to hit them after they swing the ball."
— Figurine

Ball & Chain Troopers (鉄球兵士, Tetsu Kyū Heishi?, Iron Ball Soldier) are recurring enemies in the Legend of Zelda series. They are heavily armored soldiers, equipped with large, spiked balls with a durable chain attached, hence their name. They attack by swinging their weapons around, causing substantial damage to Link should he be hit. Due to the massive amount of damage they cause, Ball & Chain Troopers are infamous and feared enemies in the series.

Ball & Chain Troopers walk steadily in Link's direction. When they get close, they stop and swing their ball and chain above their head several times before slinging it at Link. They can be stunned by the Boomerang, but will recover faster than most enemies. They are immune to the effects of the Ice Rod, but can still be frozen by the Ether Medallion.

A gray Ball & Chain Trooper acts as the guardian of Princess Zelda's cell in Hyrule Castle, dropping the Big Key needed to open the cell upon its defeat. Link can damage it either by striking with his sword or by throwing pots found in a nearby cell, and can briefly stun it with his Boomerang.

Only one Ball and Chain Trooper can be found. It appears in Kanalet Castle and guards a Golden Leaf.

Ball & Chain Troopers look and act the same as they do in Link's Awakening. They appear more frequently, but they are still quite rare. Also, they are drawn in by the Magnetic Gloves due to their heavy metallic armors, allowing for an easy kill if they can be pulled toward a pit.

Ball & Chain Troopers reappear once again. Link must dodge their huge ball and chains that they swing around in an attempt to hit him. If Link is in their sight they will throw it, giving Link an easy chance to attack for a while.

There are two types of Ball & Chain Trooper. The first type simply swings its weapon in a circle, while the second type, encountered at a late point in the quest, throws its ball & chain directly at Link. Both types are much larger than their previous incarnations. If a Link is hit by their weapon, he is sent flying across the screen and takes immense damage. Sometimes, the ball of the ball & chain is lit on fire, drawing a circle of fire around the trooper. A single Ball & Chain trooper is first encountered in Hyrule Castle, and others are seen occasionally throughout the game.

Ball & Chain Troopers can be found in the Palace of Winds and in Dark Hyrule Castle. Again, they are one of the most dangerous enemies in the game; to defeat them, Link must dodge their whirling artillery and strike their bodies. Link can also close in on them using the Shield to block their ball attacks. Performing a Downthrust with the Roc's Cape is also effective. Link takes one heart damage every time he is hit by the ball. Interestingly, every time a Ball & Chain Trooper is defeated, it will drop a Big Green Rupee. 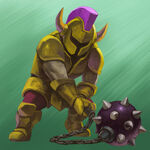 Ball & Chain Troopers appear as opponents for Link in this game. They appear in Hyrule Castle and Lorule Castle. To attack, they swing and throw their weapons, though they may also use the ball as a shield after taking a few hits. When this happens, Link must wait from a safe distance for them to begin swinging their weapons again to avoid taking damage for free.

The Legend of Zelda: A Link to the Past manga

In the A Link to the Past manga, Link defeats a Ball & Chain trooper by throwing a pot at it and knocking its helmet off, releasing the evil energies inside. 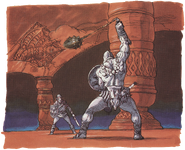 Link battles a Ball & Chain Trooper in The Legend of Zelda: Link's Awakening