"You got the Ball and Chain! This giant iron ball has incredible power!"
— In-game description

The Ball and Chain is a weapon from The Legend of Zelda: Twilight Princess. This heavy-duty weapon consists of a heavy metal ball attached to a long chain, similar to a flail, a weapon from the Middle Ages. Link mainly uses it to shatter solid blocks of ice and other sturdy objects that can withstand the abuse of all other items in his arsenal. It can also knock chandeliers swaying, allowing Link to use them as temporary platforms to reach new areas.

After first defeating its original wielder, Darkhammer, in battle at Snowpeak Ruins, Link keeps the Ball and Chain for himself, and later uses it to defeat Blizzeta. The Ball and Chain is one of two items in the game which are first wielded by a dungeon's mini-boss, and after their defeat, becomes available for Link's use, the other being the Gale Boomerang.

Though slow to wield, it's a force to be reckoned with in battle; Link can swing it over his head to ward off persistent enemies, or throw it to truly wreak havoc on his foes. Despite its size and weight, he can wield the weapon with a surprising amount of dexterity that surpasses even that of Darkhammer. The power of the Ball and Chain allows Link to destroy Redead Knights extremely quickly with just two hits, and can break Chilfos' parries, defeating them instantly.

When held, the Ball and Chain functions as a make-shift shield. Swinging it also offers some protection from airborne enemies, such as a White Wolfos in mid-leap. The Ball and Chain also slows down his movement speed considerably, like the Iron Boots. In some cases, holding the Ball and Chain gives Link the same benefits as with wearing the Iron Boots, such as being able to stand firm in the face of fierce winds. Interestingly, it can also be used to shatter boulders that would otherwise require Bombs to break and has the ability to knock down the watchtowers used by Bulblin archers, otherwise destructible only through the use of a charging Bullbo.

Ball and Chains are the preferred weapons, and also the namesake, of Ball & Chain Troopers. When swung, these weapons repel most incoming attacks, which makes it difficult for Link to reach and attack the troopers directly. Their ability to cause heavy damage coupled with their long reach makes the Ball & Chain Troopers feared enemies. General Onox and Gooma also use Ball and Chains in their respective battles against Link. 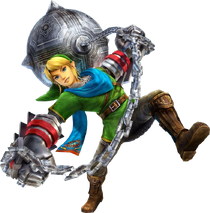 By combining the heavy Ball & Chain with his strength enhancing Gauntlets, many of the weapon's drawbacks are removed and its weight does not hinder Link's movement.