"A giant balloon, made for floating through the sky. Use a Strong Attack to trigger the quick escape function, allowing you to dodge attacks or dish out further Regular or Combo Attacks."
— In-game description

Balloon is the default weapon type used by Tingle in Hyrule Warriors. It is described as a giant balloon made for floating through the sky. Its Strong Attack triggers a quick escape function allowing Tingle to dodge attacks or dish out further regular or combo attacks. In addition to his balloon, Tingle can use an array of items and equipment as part of his moveset such as Tingle Bombs, map roller, his Wallet, and even a Tingle Statue. Tingle's standard weak point attack causes a fairy to appear which Tingle will try to grab only to hit a group of Bombs surrounding his opponent causing them to explode. Tingle's Boss weak point attack, he will pull out a large Tingle Bomb and throw it at the Boss, then lead up into the air and finish the attack with a powerful kick to the Bosses' weak point.

Promotional Render of the Rosy Balloon from Hyrule Warriors

Promotional Render of the Love-Filled Balloon from Hyrule Warriors

Promotional Render of the Mr. Fairy Balloon from Hyrule Warriors 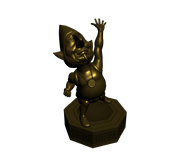 Render of the Tingle Statue from Hyrule Warriors 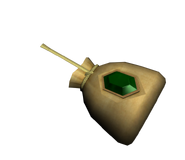 Render of the Tingle's Wallet model from Hyrule Warriors