Zeldapedia
Register
Don't have an account?
Sign In
Advertisement
in: The Legend of Zelda: Ocarina of Time bosses
English

"Many parasitic jellyfish swarm around this monster. Aim for its body, protected by jellyfish!"
— Navi

Bio-Electric Anemone: Barinade (電撃旋回虫バリネード, Dengeki Senkaichū Barinēdo?, Electric Rotating Intestinal Worm: Barinade) is the boss of Inside Jabu-Jabu's Belly, the third dungeon in The Legend of Zelda: Ocarina of Time. This parasitic organism is revealed to be the cause of Lord Jabu-Jabu's gastrointestinal distress. It appears to have a symbiotic relationship of some sort with Bari. It also bears some resemblance to Kalle Demos.

The boss consists of four parts, each of which involve attacks that deplete one quarter of a heart. First, it fires beams of electricity at Link. Link needs to aim the Boomerang at the tentacles attaching Barinade to the ceiling. Once he has severed the tentacles, Barinade will spin several Bari around itself while chasing after Link, who must aim the Boomerang at Barinade's main body to stun it. Once stunned, Link must use the Boomerang to defeat the now stationary Bari, leaving the main body of Barinade completely vulnerable to attack. Barinade now shoots several beams of electricity at Link, which Link can sidestep and retaliate to with his Boomerang. Link then follows up the preemptive strike with several sword slashes or Deku Stick strikes until Barinade recovers and repeats the process until it becomes depleted of its health. Upon its defeat, Barinade starts to bloat around its body until it explodes in a grotesque fashion. Princess Ruto then appears in the blue light that teleports her and Link back to Zora's Fountain. She gives Link the Zora's Sapphire, the third Spiritual Stone, as a reward. 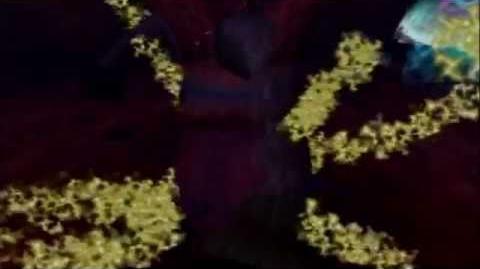 Barinade's name possibly originated from the jellyfish-like Bari, with whom Barinade seems to have a connection.