Zeldapedia
Register
Don't have an account?
Sign In
Advertisement
in: The Legend of Zelda: Phantom Hourglass bosses

This page is about the boss. For the character, see Bellum.

Temple of the Ocean King

Bellum, Evil Phantom (夢幻魔神 ベラムー, Mugen Majin: Beramū?, Phantom Devil: Bellum) is a boss from The Legend of Zelda: Phantom Hourglass. He has multiple tentacles, each with an eye on the end.

Link must battle Bellum in order to restore Ciela's memory and remove the curse on the Temple of the Ocean King. There, Bellum is found hiding in a pool of murky, poisonous water. He attacks Link by using a contingent of Bellum Blobs, intended to distract the hero. Link must first use his Grappling Hook to remove the layers of slime which cover Bellum, then to grab him and bring him close enough to strike with the Phantom Sword.

Eventually, after taking a few hits, Bellum leaps up to the second floor; Link must follow him there and equip his bow and arrows. He must then shoot each of the eyes which adorn Bellum's tentacles using his arrows, which will cause the beast to lose his grip and fall into the pool of poison below. The strategy is repeated on the second floor, but then he will climb out and jump to the third floor, where the same strategy must be repeated. It becomes trickier over time, as Bellum both strikes Link with his tentacles and closes the eyes to make them harder to shoot.

After Ciela's memory returns Link must head down to see Bellum flying around his pool, rendering him untouchable. Link then uses the Phantom Spheres Ciela conjures to freeze time and attack his eye until he is defeated. After Bellum is defeated, the Temple of the Ocean King collapses in on itself; however, Link and Ciela are rescued just in time by Oshus. 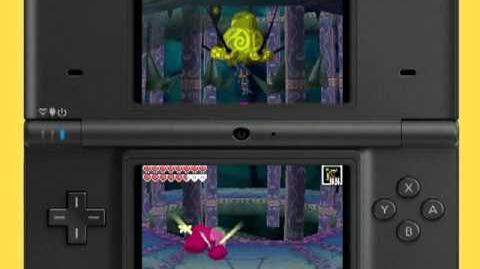