Bellumbeck is the final boss from The Legend of Zelda: Phantom Hourglass. He is the Bellum-possessed form of Linebeck.

When Linebeck uses the Phantom Sword to attack Bellum's tentacles, which were holding Link and Tetra captive, the creature latches onto Linebeck's back. Darkness gathers around them, Linebeck's skin turns purple, and he takes the form of a giant Phantom. The music that ensues is a heavily dramatized version of Linebeck's theme.

When the battle begins, Ciela gives Link a Phantom Sphere to pause time. Link can use it, then hit Bellumbeck in the back where his weak spot is. Ciela complains about how the eye is not open and goes on the top screen and gets captured by a tentacle. At this point, battle progression is made possible.

Bellumbeck has four attacks; a down swipe, which is a straight down swing with the sword; a whip attack with one of his tentacles; a side swipe, usually starting with a jump to the side; and the Hurricane Spin; this last attack actually makes a hurricane that can damage Link multiple times and lasts about 10 seconds. The Hurricane Spin can be neutralized with one of Link's own Spin Attacks or the Great Spin Attack. If Bellumbeck and Link clash swords while using spin attacks, Link and Bellumbeck automatically proceed to the "rub" portion of the battle, where the player must rub the touchscreen to throw Bellumbeck off his guard. Each of Bellumbeck's attacks cause one heart of damage, except the Hurricane spin which does half a heart, but can hit twice. 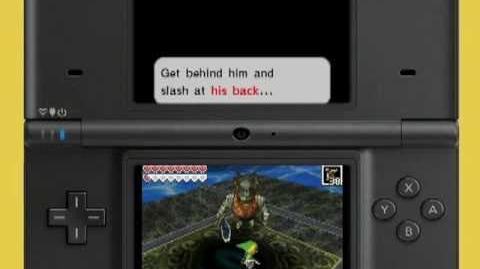 Bellumbeck makes a prominent appearance, appearing after Linebeck makes amends with Jolene. Taking shape, he demands the Phantom Hourglass, and teleports away to the Temple of the Ocean King. When Link confronts him, Bellumbeck is easily able to deal massive damage, but is stopped just short of killing him by Linebeck, who refuses to be controlled any longer. Though he tries to kill himself, the Hourglass suddenly releases a Phantom Sphere, allowing Link to get behind him and free Linebeck.

Bellumbeck is a portmanteau of Bellum and Linebeck, the two characters that make up the boss.