Zeldapedia
Register
Don't have an account?
Sign In
Advertisement
in: The Legend of Zelda: The Minish Cap bosses, Chus
English

"Appears in Deepwood Shrine. A perfectly ordinary Chuchu. Though not much of an enemy usually, they are terrifying to anyone Minish-sized."
— Figurine

The Big Green Chuchu (大チュチュ緑, Dai Midori Chuchu?) is the boss of the Deepwood Shrine, the first dungeon in The Legend of Zelda: The Minish Cap. It serves as the guardian of the Earth Element. Its name is somewhat misleading, as it is merely a normal-sized Green ChuChu that appears giant among its race only because Link is Minish-sized while fighting it.

To defeat this enemy, Link must use the Gust Jar to suck away the pile of goo that serves as both the Big Green ChuChu's base and feet. Once enough of its "feet" have been sucked away, it will lose its balance and sway back and forth for a while eventually collapsing under the weight of its own head, leaving it vulnerable to Link's sword for a limited period of time. When the ChuChu is dazed, Link can be damaged if he is situated beneath its head when it topples. After it gets up, it will bounce around the room, chasing Link. After repetition of this process, the Big Green ChuChu will be defeated. 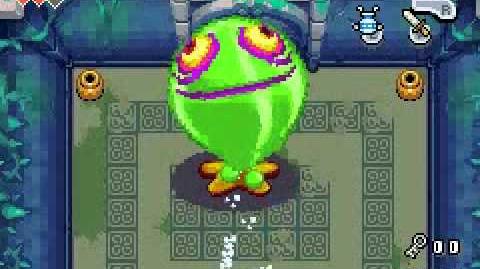