Zeldapedia
Register
Don't have an account?
Sign In
Advertisement
in: The Legend of Zelda: The Minish Cap bosses
English

This article is about the boss from The Minish Cap. For the enemy from Ocarina of Time, Majora's Mask and The Wind Waker, see Bigocto.

"Appears in the Temple of Droplets. Frozen solid by the power of the Water Element. He's been frozen so long that his hunger is unbearable."
— Figurine

Big Octorok (大オクタロック, Dai Okutarokku?) is the boss of the Temple of Droplets, the fourth dungeon in The Legend of Zelda: The Minish Cap. Despite its name, it is not actually a giant Octorok; rather, Link's small size makes it seem larger than normal relative to himself. Big Octorok is frozen when Link enters the Temple of Droplets. When Link unfreezes the Water Element, however, he also unfreezes the Big Octorok, who proceeds to suck in the Water Element and retreat into the room behind him. 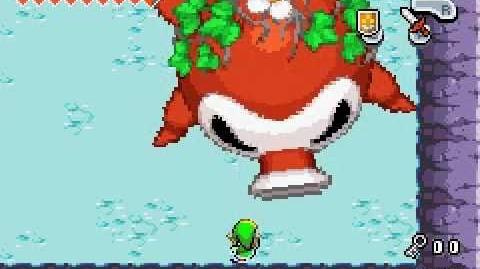