Biggoron is a recurring character in the Legend of Zelda series. As his name suggests, he is a massive Goron. Due to his size, he usually resides outside the Goron settlement or on top of a mountain.

Biggoron resides on the summit of Death Mountain, and is almost unnoticeable until Link approaches him, causing him to sit up. He is a highly skilled blacksmith and Carpenters praise him for his skill. During the trading quest for Biggoron's Sword, Link is able to take the Broken Goron's Sword made by Medigoron to Biggoron to convince him to make a better sword to make up for his brother's misdeed. Biggoron's eyes, however, have been affected by the smoke and ash from the recent eruptions of Death Mountain. Before he can repair the sword, he sends Link to make the World's Finest Eye Drops to cure the irritation. After Link gives the eye drops to Biggoron, he reforges the broken sword to create Biggoron's Sword, which is twice as powerful as the Master Sword.

Biggoron also has a brother named Medigoron, whose shop is found on the second level of Goron City. Unfortunately, he is not as talented a blacksmith as his brother, and can only make the brittle Giant's Knife. He is also an old friend of King Zora and Lake Scientist.

By the powers of the evil Skull Kid, Biggoron has been cursed and turned invisible. He sits at the far end of the narrow pathway leading to Snowhead Temple, blowing gusts of wind that prevent Link from walking on the path. Biggoron was the cause of the death of Darmani, who claims to have been blown off the path leading to the temple. Link can access the temple only after learning all the notes for the "Goron Lullaby". Link plays the song for Biggoron on his Drums of Sleep — Biggoron is rendered visible again, and falls into the great ravine under Snowhead Temple. Once Goht has been defeated and spring has returned to Snowhead, he will sit outside Snowhead Temple, claiming that he has no recollection of what he had been doing.

Biggoron lives atop Goron Mountain and is suffering from a terrible head cold. After Link gives him the Lava Soup, he is instantly cured and gives him the Goron Vase in gratitude.

"Oh, what a tiny Goron you are... You make this big Goron happy with this unexpected visit to my distant home. Tell me, little one, what do you know about shields?"
— Biggoron

Biggoron lives in the mountains atop the Veil Falls, near the giant Updraft leading to the Cloud Tops. After Link has completed the Goron bottle quest and fused Kinstones with both Eenie and all of the Mysterious Walls, he must fuse Kinstones with a Goron in the Goron Cave near Lon Lon Ranch. This will make Biggoron appear. The giant Goron's hands block the hero's progress through Veil Springs; however, he will lift his fingers out of the way as Link walks past. After Link has defeated Vaati at least once, he can go to Biggoron and offer him his Small Shield. If Link comes back after waiting for a bit (actual time, not specific events), Biggoron will spit out Link's Small Shield, it having become the Mirror Shield. Interestingly, he seems to mistake Link for a fellow Goron.

Biggoron is the leader of the Gorons on Goron Island. Although he is not as big as the Biggoron from other games, he is still the largest Goron on the island. His son is named Gongoron. After Link speaks to every Goron on the island, Biggoron asks Link a series of questions about the island and its inhabitants. Link must pay 20 Rupees for every attempt to answer the questions. For each question Link gets right, he receives Rupees as a reward. If he answers all six questions in a row correctly, he is given the name "Goro-Link", and returns all the Rupees he won in exchange for a Wisdom Gem. Now that he is an initiated member of the Gorons, Link is allowed to enter the northwestern part of the island into the temple. It holds the first of the three Pure Metals required to forge the Phantom Sword.

"A legendary greatsword forged by a Goron craftsman for a hero who traveled through time. The exceptionally sharp cutting edge is testament to the craftsman's mastery."
— Biggoron's Sword description

In The Legend of Zelda: Breath of the Wild, Biggoron's Sword appears as a special weapon that can be randomly acquired via using the Ocarina of Time Link Amiibo with the Amiibo Rune after at least one Divine Beast is freed. Though Biggoron is not mentioned by name he is referenced simply as a Goron craftsman responsible for forging Biggoron's Sword which along with the Great Flameblade it is the only Goron blade with a cutting edge as other Goron made swords are blunt and function more like hammers. Its description notes its exceptionally sharp cutting edge is a testament to Biggoron's mastery as a blacksmith. However like most weapons Biggoron's Sword is breakable though replacements can be randomly acquired via the Amiibo Rune. Presumably Biggoron's Sword has become breakable over time or it is due to game mechanics. It is implied the elderly blacksmith Rohan keeps the Goron's proud blacksmithing traditions and arts practiced by Biggoron and Medigoron in the distant past alive in modern times.

Impa's various Giant Blades are stated to have been forged by the finest Goron smithy who ever lived which is implied to be Biggoron, given that the Biggoron's Knife and Biggoron's Sword appear as Impa's Level 2 and Level 3 Giant Blades respectively. 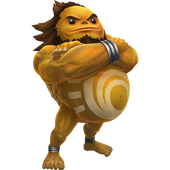 Darunia's "Standard Outfit (Great Sea)" is a Biggoron recolor based on his Phantom Hourglass incarnation.