Zeldapedia
Register
Don't have an account?
Sign In
Advertisement
in: The Legend of Zelda: Skyward Sword bosses
English

"This species of parasite is currently attached to Levias. It is known for its enormous optical structure. This horrifying life-form utterly controls the mind and body of its host."
— Fi

Ocular Parasite: Bilocyte (巨眼寄生種パラスパラス, Kyōgan Kiseishū Parasuparasu?, Giant-eyed Parasite: Paras Paras) is a boss in The Legend of Zelda: Skyward Sword. It is encountered on the enormous whale-like creature Levias.

Bilocyte can fire noxious goo from its mouth, which Link can repel with his sword. To attack against Bilocyte's central eye, however, Link has to initially destroy the fins on either side. By swinging his sword to the left or right, he can redirect the goo attacks at different angles in order to hit the fins. Once the fins are destroyed, vertical sword strikes are used to send the balls of goo back to the eye, sending it to the ground. Alternatively, after destroying the fins, Link can either fire a Skyward Strike or an arrow to send Bilocyte to the ground. Link can then slash away at its eye. As the battle rages, Bilocyte will start dodging the balls of goo by moving to the left or right. Link must then swing his sword to the left or the right depending on Bilocyte's position.

It is possible to reach the second stage of this boss battle without completing the first stage by landing on Levias any time in the battle; the eye is always present and can be defeated, but only after the first stage is complete will it be visible (source: https://www.youtube.com/watch?v=EhiGrjmLqw4&list=UUPat9T3kXEYxKNY01x0hJeQ). 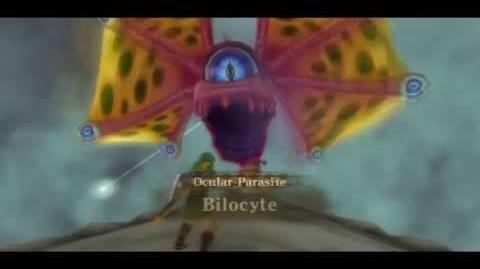 It is possible that Bilocyte is a portmanteau of "bile", which may be referring to its goo attacks, and "cyte", a corruption of the "site" suffix used in "parasite". The japanese name Paras Paras is also a play on "parasite".