Zeldapedia
Register
Don't have an account?
Sign In
Advertisement
in: Articles with non-canonical information, The Legend of Zelda races, Zelda II: The Adventure of Link races,
and 17 more

This article is about the recurring race. For the enemies from Link's Awakening DX, see Camo Goblin.

Blin is the name given to the weapon wielding race of enemies with the "-blin" suffix in the Legend of Zelda series. Appearing in almost every game in the series, barring The Legend of Zelda: Majora's Mask and The Legend of Zelda: Four Swords Adventures, this race includes Moblins, Bokoblins, Miniblins, Bulblins, and Big Blins. No direct connection is made between these types of enemies in-game, except for the similarity in their names, appearances, and mannerisms. Blins tend to be the primary muscle of the enemy forces and are often shown to be more intelligent and organized than other enemies. Some Blins are non-agressive and try to live normal lives, such as the Secret Moblin and the Monster Lady.

Moblins make their first appearance. Appearing exclusively in the Overworld, they are hostile towards Link.

A Secret Moblin appears in caves throughout Hyrule where he gives Rupees to Link, muttering the infamous quote, "IT'S A SECRET TO EVERYBODY".

Moblins carry spears and will throw them at Link, as well as jab them at him if he gets too close.

Moblins appear around Koholint Island. Most prevalent in the Mysterious Woods, they act similar to their The Legend of Zelda counterpart.

In the manga based on Link's Awakening, a Moblin named Karuna claims to be the greatest swordsman on the island. Despite his self-proclaimed title, he is proven to be inferior to Link after he loses his life in a duel.

Moblins wielding spears guard the Sacred Forest Meadow when Link is an adult. Interestingly, they are one of the few enemies in the game that cannot be Z-targeted.

A bigger Moblin carrying a club guards the end of the Sacred Forest Meadow. This same Moblin appears in the Spirit Temple in The Legend of Zelda: Ocarina of Time Master Quest.

Moblins are very prevalent in the Oracle games. They inhabit the Overworld and come in different skill classes.

A sub-story including the Great Moblin and his followers appears in both stories. During a Linked Game, the Moblin ruler and his fellow Moblins move to the linked country.

Blins play a big role in The Wind Waker. Moblins appear as the primary muscle of Ganondorf's forces, while Bokoblins and Miniblins make their first appearances.

Moblins carry Long Spears, Bokoblins wield Sharp Machetes and Boko Sticks and Miniblins utilize pitchforks. They are common in the Forsaken Fortress and other dark areas, but also appear in areas like the Forest of Fairies.

Bokoblins come in a variety of colors and depending on which color they are they are stronger or weaker and wield shields.

Maggie who was kidnapped by Ganondorf falls in love with a Moblin named Moe and she hopes to marry him. Moe writes her a letter when she returns to Windfall Island stating that he wants to eat her up. However, Maggie misinterprets the letter, thinking that it is a proposal.

Moblins are virtually identical in appearance and attack method to their The Wind Waker counterparts, however, instead of carrying torches, they are instead equipped with either bows or spears. The bowmen will shoot Link on sight, while the spearmen charge at him in a straight line, although they do not stop and try to slash at Link.

Bulblins make their Zelda debut. Led by King Bulblin, they are the most common enemies in the game. Often using Bullbos as steeds, Bulblins range drastically in weapon use. Bows and clubs are common, while King Bulblin wields a giant axe as his weapon of choice.

Miniblins appear on the sea and are hostile towards Link.

Miniblins and Bulblins appear, along with Big Blins, a new type of Blin. Bulblins ride around New Hyrule on Bullbos and attack Link's train with Bombs. A group of Miniblin and Big Blin pirates reside in the Ocean Realm, and frequently kidnap residents. Other Miniblins ride Armos as mounts.

Bokoblins are prevalent enemies on the Surface. They appear in several varieties, including zombified and technologically advanced Bokoblins, new to the series. Moblins also appear, though less frequently than Bokoblins. They wield spears and large, square shields made of either wood or iron, and are often seen blocking narrow paths. Moblins in Skyward Sword are depicted as overweight monsters who relay on their size and strength.

Bokoblins and Moblins appear as enemies with Blue, Black, Silver, and Gold variants in addition . Hinox seem to resemble Blins in this game and may be a related or Giant one-eyed species of Blin. Moblins are depicted as being stronger and brutish, though with lean muscular physiques. Bokoblins are depicted much like in the past as common grunts. Both Bokoblin and Moblin are shown to be able to work together and with other monsters such as Lizalfos and ChuChu, though Moblins will sometimes pick up and throw Bokoblins as improvised weapons, showing that Moblins care little for their smaller comrades well being.

Additionally, new undead Blin variants are introduced such as Stalmoblins and Stalkoblins which are the reanimated skeletons of Moblins and Bokoblins, and are essentially serve as the Moblin and Bokoblin equivalent to Stalfos.

Additionally a new type of Cursed Bokoblin and Cursed Moblin are depicted as Bokoblin and Moblin skulls that have been corrupted and possessed by Ganon's Malice turning them into little more than mindless flying skulls.

Bokoblin and Moblins value Dragonbones as a material for crafting high quality "Dragonbone Boko" or "Dragonbone Moblin" series weapons, shields, and bows. However Moblins do not craft their own shields or bows, as they prefer clubs and spears or "Lizal" series bows or bows designed by Hylians and non-monster races. Most Bokoblin and Moblin weapons are crude though "Spiked" and "Dragonbone" equipment is decent though still crude compared to "Lizal" and "Lynel" series weapons. Bokoblins, Moblin, and Lizalfos occasionally wield weapons, shields, and bows of the other. Two mask based on Blin exist the Bokoblin Mask and Moblin Mask which allows Link to blend in with the archetype they represent. Majora's Mask affects both in the same manner along with Lizalfos and to lesser degree Lynels. Moblins and Bokoblins also wield weapons they've managed to scavenge. Bokoblins will even wield cooking utensils, farming tools, axes, Torches, Boat Oars, or Wooden Mops as improvised weapons. Moblins and higher tier Bokoblins favor conventional weapons such as broadswords, claymores, halberds, and spears made by non-monsters. Bokoblins are also skilled horseback riders and Stalkoblins ride undead horses called Stalhorses. Moblins have strong leg muscles allowing them to avoid being knocked over by Remote Bomb explosions and will even kick at Link.

Bokoblins are omnivorous, while Moblins are primarily carnivorous though both enjoy meat and fish. They are also implied to prey on Hylians as a food source or at believed to eat people if given the opportunity.

Bokoblins and Moblins are capable of crafting their own armaments using natural materials such as wood and bones. However both are generally poor craftsmen as their craftsmen tends to be shoddy and simplistic. However they often make up for this by reinforcing them with bones to increase damage or strengthen it. However all Bokoblin and Moblin equipment is made of wood thus vulnerable to fire though they occasionally use this to their advantage by lighting their weapons on fire to burn their opponents seemingly unconcerned about them burning up. Their armaments come in three tiers the first tier being little more than pieces or wood hastily fashioned into weapons, bows, or shields. The second tier being reinforced with animal bones to create stronger "Spiked" versions which are stronger than the first tier. The third and final tier are generally the best crafted and include fossiled bones to create "Dragonbone" versions that are the strongest equipment they can craft. While Bokoblins craft a variety of equipment, Moblins specialize in crafting spears and two-handed clubs. Both Moblins and Bokoblins are implied to trade and/or share armaments they craft with each other and Lizalfos. This especially holds true for Moblin whom lack Moblin made bows, shields, or single-handed weaponry.

Bokoblins, Bulblins, and Moblins all appear as enemies in Hyrule Warriors and Hyrule Warriors Legends. Bokoblins and Moblins resemble their Skyward Sword incarnations, while Bulblins are based on their Twilight Princess design. Bokoblins and Bulblin Archers appear as ranged units. Additionally the game also introduces Bokoblin and Bulblin Summoners capable of summoning enemy units. Along with standard Moblins, there are also Shield Moblins that wear helmets and wield metal shields. Both types of Moblin act as enemy enforcers/captains. There are also Dark Moblins and Dark Shield Moblins.

While they are typically enemies, they occasionally appears as allied units in certain scenarios.

In Hyrule Warriors Legends, a special type of Moblin Summoner called Ceremonial Troops appear in Linkle's Tale: The Demon Lord's Plan as members of Ghirahim's Forces. Miniblins and Big Blins from The Wind Waker also appear as new enemies from the Era of the Great Sea. There is even a new type of Big Blin called a Stone Blin. In Wind Waker: A New Disturbance, a Stone Blin capable of speech called Boss Blin leads the Monster Forces in Forsaken Fortress against the Hyrulean Forces and Tetra that are protecting Windfall. Boss Blin sends Big Blin and Ruffians (basically stronger Big Blins) and Gohma to capture the town's Keeps, but is defeated by the combined might of Tetra and Link. Both Big Blins and Stone Blin are vulnerable to the Hammer.

A beta version of the Moblin surfaced prior to the game's release, but they never made it into the game for unknown reasons. This Beta Moblin wields a large battle axe.

Artwork of a Moblin from The Legend of Zelda

Artwork of a Club Moblin from Ocarina of Time 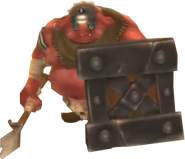 Render of a Metal Shield Moblin from Skyward Sword 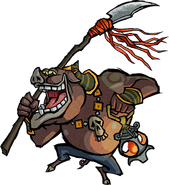 Artwork of a Moblin from The Wind Waker 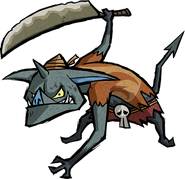 Artwork of a Bokoblin from The Wind Waker

A group of Miniblins from The Wind Waker 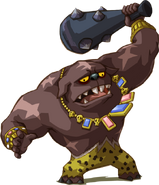 Artwork of a Big Blin from Spirit Tracks

A Bulblin from Twilight Princess

A Bokoblin from Twilight Princess 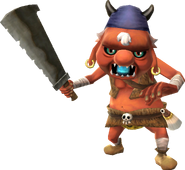 A Green Bokoblin from Skyward Sword 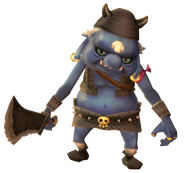 A Blue Bokoblin from Skyward Sword 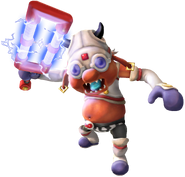 A Technoblin from Skyward Sword

Artwork of a Bokoblin from Breath of the Wild

A Stalkoblin from Breath of the Wild 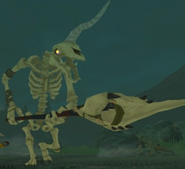 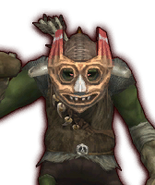 A Bulblin Summoner from Hyrule Warriors 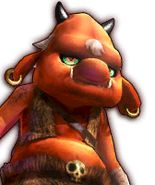 A Bokoblin from Hyrule Warriors 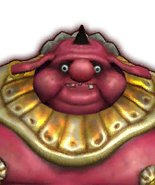 A Moblin from Hyrule Warriors
Community content is available under CC-BY-SA unless otherwise noted.
Advertisement