"This house used to be a hideout for a gang of thieves. What was their leader's name... Oh yeah, his name was Blind and he hated bright light a lot."
— Villager

Blind (ブラインド, Buraindo?) is the boss of Thieves' Town, the fourth dungeon in the Dark World in The Legend of Zelda: A Link to the Past. In the Game Boy Advance port of A Link to the Past, Blind (with a different color palette) reappears as a mini-boss in the Palace of the Four Sword.

Despite his name, Blind is not actually blind, but he does have an aversion towards bright light. It is unknown what Blind's appearance was like in the Light World, but in the Dark World, he appears as a red-skinned demon clad in a white robe.

Blind was once the leader of a gang of thieves who operated out of a base in Kakariko Village. Somehow, Blind stumbled onto an entrance to the Dark World, where he was transformed and became a servant of Ganon. He was charged with guarding Thieves' Town, a huge dungeon situated beneath the Village of Outcasts, the Dark World equivalent of Kakariko Village.

Eventually, Link arrives in Thieves' Town to rescue one of the Seven Maidens who had been captured by Agahnim. As part of a trap, Blind assumes the form of the captured maiden and places himself in a cell within the dungeon. Link finds and rescues the "maiden"; however, if he attempts to exit, she tells him not to go that way. Eventually, they happen upon a brightly lit room. Blind is pained and reveals his true form to Link, prompting a battle. Once victorious, Link is able to rescue the true maiden.

Once Blind begins the battle, he fires energy beams and fireballs at Link at a rapid pace. Upon sustaining enough damage, Blind's body crumples into a heap, and his head dislodges and flies around the room, shooting fireballs at Link. Immediately thereafter, Blind regenerates, and recommences his regular attack pattern while his disembodied head, which cannot be damaged, continues to attack Link. After sustaining still more damage, this process is repeated, causing Blind to dislodge another head that Link must avoid. Finally, after Link deals him several more blows, Blind is defeated. 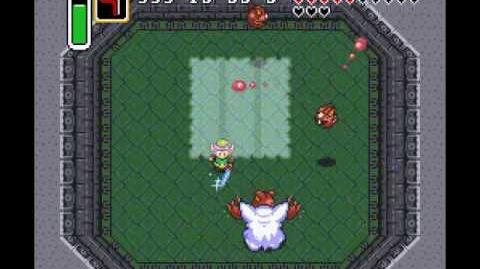 Palace of the Four Sword

In the Palace of the Four Sword, Link must face Blind again, who appears as Link's Uncle before the battle begins. This time, once Blind detaches his head, Link must bounce it back at Blind's body in order to render him vulnerable to attack. This process repeats until there are three floating heads. Once all three of these are rejoined with Blind's body, he is defeated. His dialogue with Link while disguised as Link's Uncle is the original SNES version of his uncle's death speech. 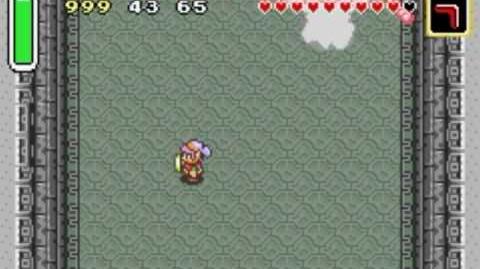 Retrieved from "https://zelda-archive.fandom.com/wiki/Blind?oldid=492447"
Community content is available under CC-BY-SA unless otherwise noted.