Twilit Ice Mass, Blizzeta (覚醒大氷塊 フリザーニャ, Kakusei Dai Hyōkai Furizānya?, Awakening Giant Ice Block Freezernya) is the boss of the Snowpeak Ruins, the fifth dungeon in The Legend of Zelda: Twilight Princess. Blizzeta is "created" when Yeta, in possession of one of the Mirror of Twilight shards, becomes corrupted by its effects and begins controlling the frost around her to attack Link. Interestingly, Blizzeta is the only boss in the game that Link cannot use his sword to defeat and the only boss besides Stallord that Link cannot use the Finishing Move on. Also, she, Fyrus, and Possessed Zelda are also the only bosses in Twilight Princess to return to their original forms after they are defeated, rather than perish like the rest. This is due to the fact that Yeta, Darbus, and Princess Zelda are victimized characters rather than just being enemies.

During the first phase, Blizzeta will simply slide around the room like a curling stone and can only hurt Link by sliding into him. By using his newfound Ball and Chain, Link can break off pieces of Blizzeta's icy shell. After each hit, the shell grows smaller and changes its shape. After a few hits, Blizzeta will scatter Mini Freezards all around the room. Using the Spinner can make it harder for Blizzeta to hit Link. Throwing the Ball and Chain will also stop any Mini Freezards directly in Link's path, and hitting the shell will cause any Mini Freezards launched before the hit to disappear, although new ones can be launched.

During the second phase, Blizzeta will summon enormous icicles, which she intends to drop on Link. By watching the highly reflective ice floor, Link can easily avoid these by simply running away. When all icicles have been thrown, Link should try to destroy at least one with his Ball and Chain. Some will release hearts to restore Link's health. Blizzeta will then float in the air with icicles circling her. During her next attack, Blizzeta will use the remaining icicles to form a barrier around Link. After doing this, she will attempt to crush Link with her own icicle-shaped shell. If Link destroyed at least one icicle, he can run out of the icicle circle to avoid the attack and smash Blizzeta with the Ball and Chain. This is another chance to destroy them with the Ball and Chain and receive any hearts within them. After three hits, Blizzeta's shell breaks, and she returns to normal after being exposed to the warm sunlight shining through a window. 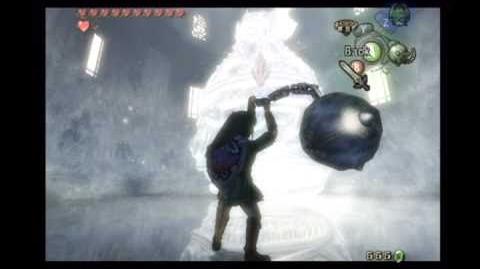 Blizzeta is a portmanteau of the English word blizzard and Yeta, the name of Blizzeta's original form.