"Drink this to replenish all hearts in one gulp, Brother! It is expensive, but its effectiveness is unbeatable!"
— Goron

The Blue Potion, also known as the Ultimate Potion or the Medicine of Life and Magic, is a recurring item in the Legend of Zelda series. This handy potion fully restores both Link's health and magic. It occasionally requires a mushroom or Chu Jelly to be made.

Blue Potion, called the Medicine of Life and Magic in-game, can be purchased from Syrup's Magic Shop in mid-eastern Hyrule.

Blue Potions can be purchased from Granny in Granny's Potion Shop for the price of 100 Rupees after Link has brought her an Odd Mushroom, implying that it may be used as an ingredient.

Blue Potions can be bought from the Magic Hags' Potion Shop in the Southern Swamp if Link has brought them a Magic Mushroom needed to make it. Blue Potions can also be bought from the Business Scrub in Ikana Canyon. Blue potions have the additional ability to remove a jinx placed on Link that was caused by being hit by a Blue Bubble. Later, a Gibdo asks Link for one Beneath the Well.

If Link gives fifteen globs of Blue Chu Jelly to Doc Bandam, the owner of the Chu Jelly Juice Shop on Windfall Island, he will start selling Blue Potion (after this, Link can trade 5 Blue Chu Jelly for a free Blue Potion). Blue Potion can also be obtained by giving four Boko Baba Seeds to Hollo in the Forest Haven.

Blue Potion can be purchased from the Witch's Hut in the Minish Woods. It restores eight Hearts.

Blue Potions can be bought for 100 Rupees from the Oocca Shop in the City in the Sky or from the Goron Night Shop sitting in front of Barnes' Bomb Shop; however, the Goron who runs it appears only at night. Blue Potions can also be bought for 50 Rupees at the Malo Mart in Hyrule Castle Town, provided that Link has helped Malo buy out Chudley's Fine Goods and Fancy Trinkets Emporium.

As there is no Magic Meter in Twilight Princess, a Blue Potion only refills Link's health, though it does so completely.

Blue Potion can be brewed in the Witch's House if Link gives the Witch 10 Monster Tails. Drinking one replenishes all of Link's hearts.

Blue Potion appears as a type of Potion in Hyrule Warriors and Hyrule Warriors Legends. It is the 3rd type of Potion to appear in both games, obtained by collecting 7 Illustration Pieces (acquired by defeating Gold Skulltula) and upgrading the Bazaar to Level 3. It restores 10 Hearts and half of a Special Attack gauge.

A cauldron of Blue Potion from Majora's Mask

Artwork of Blue Potion from The Wind Waker 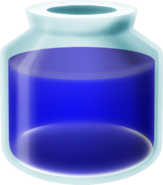 A bottle of Blue Potion from A Link Between Worlds