"Boss of the Shadow Temple, revived from the well. Look at it with the eye of truth!"
— Navi

Bongo Bongo is a gargantuan, invisible, and evil spirit, appearing as a one-eyed monster with disembodied hands and a black-purpleish colorization. Prior to the game's events, it was sealed away by Impa in the bottom of the Well of Three Features in Kakariko Village. However, when Ganondorf assumes power, Bongo Bongo eventually breaks the seal placed on it and sets Kakariko Village on fire. Link arrives just as Bongo Bongo escapes, but fails to stop it from traveling to the Shadow Temple.

The battle takes place on a large bongo drum, surrounded by a strange liquid that will damage Link if he comes into contact with it. Bongo Bongo beats the drum, setting up a fast, softer tempo with one hand but tapping much harder at a slower tempo with the other one. The heavier drum beat bounces Link up into the air, which makes aiming and dodging harder. This bouncing effect can be largely negated if Link wears the Hover Boots, the main item of the Shadow Temple. Bongo Bongo always remains on the opposite side of the drum, as far away from Link as possible. When Bongo Bongo stops drumming, it is preparing for an attack.

Link must first stun both of Bongo Bongo's hands with arrows, the Longshot, or his sword. Once Link has stunned one of its hands, the other hand retaliates with one of five attacks: a horizontal swipe across the drum, a horizontal slap, a downward smack, a direct punch, or by grabbing Link with a fist and throwing him into the surrounding damaging liquid. All of these do significant damage to Link. If both hands are unhindered, Bongo Bongo will try to smash Link in a devastating clap.

After Link has stunned both of its hands, Bongo Bongo does one more attack, involving its entire body and both fists charging across the drum towards Link. This attack is unavoidable and causes massive damage to Link. While Bongo Bongo is executing this attack, this is one of the only times the creature is vulnerable; its eye will open and Link is able to fire an arrow at it, or, with precise timing, strike it with his sword. This will disable it, allowing Link to damage the boss by slashing its eye repeatedly for a moment, before it rises again and resumes its attack. Because the Shield can not block any of Bongo Bongo's attacks, it is preferable to use the Biggoron's Sword in order to maximize damage. Though not required, the Lens of Truth allows Link to see Bongo Bongo's eye, making the battle much easier. Another way to defeat Bongo Bongo is to use the Ice Arrows. When Link freezes one of its hands, the other hand starts attacking the frozen one, trying to break the ice. While attacking its own hand, Bongo Bongo opens its eye, at which point Link can shoot an arrow to stun it (the Lens of Truth being helpful for aiming), then attack the eye with his sword.

After Link delivers the death blow on Bongo Bongo, it will go into convulsions, body thrashing and hands flailing around. It inadvertently creates a frenzied drumroll, which gradually slows as its life drains away. It then turns black, and melts into dark blue powder that burns away into nothingness. In the GameCube collector's edition, as well as the 3DS and Wii versions, the powder is dark red instead of blue. It retains its original look in the Wii U virtual console version.

Interestingly, Bongo Bongo has the largest amount of health out of all the bosses in Ocarina of Time. This holds true if the player counts only sword slashes or counts sword slashes and extra weapon hits, ending up with a total of twenty-six and sixty-three hits, respectively. 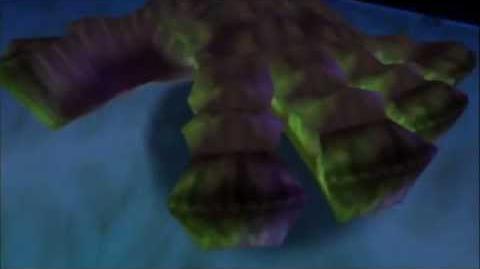 Bongo Bongo is theorized to be (or have been) a Sheikah. This is because when Adult Link talks to Shikashi near the House of Skulltula, the elderly man states:

"A long time ago... There was a man in this very village who had an eye they said could see the truth! Now usually, you have to train your mind's eye most strenuously to actually see the truth... But this fella, no, they say he had a different way of doing things... His house stood where the well is now..."
— Shikashi

The shapeshifting monster could be the Man Who Could See the Truth due to the fact that Bongo Bongo has one eye and was living in the well. His house could have been sent to the bottom of the well, along with certain artifacts (the Lens of Truth, a Sheikah item). Bongo Bongo's description says Phantom Shadow Beast, with "phantom" possibly meaning "deceased person" and "shadow" potentially alluding to "Shadow folk", another name for the Sheikah. However, the "eye" he references could have been a metaphor, and a direct reference to the Lens itself.

Also, it is possible that Bongo Bongo betrayed the Royal Family of Hyrule in the Hyrulean Civil War and was executed, being sent (along with his house) to the bottom of the Kakariko Well. To add to this theory, The Bottom of the Well has various torturing devices, which means this could have been the place that Bongo Bongo was executed in, which could explain his appearance, possibly due to having his hands cut off and the blood drained from his body. The condition of his neck could also be akin to a wound from a crude decapitation. Another theory proposed is that it was an Interloper, but it was not imprisoned in the Twilight Realm. Instead it was sealed away in the Bottom of the Well by Impa. It is also possible that before they knew about the Mirror of Twilight they bound certain interlopers in distinct places. The name 'Shadow Beast' is also used for some Interlopers, which may imply that Bongo Bongo is a phantom version of an Interloper or is connected to them in some way.

It is also possible Bongo Bongo was created by Ganondorf after he became the King of Evil, since Sheik never mentions when Impa sealed it in the well, and the entrance to the Bottom of the Well is sealed off as an adult at all times. Also, he is never seen in the well while Link is a child, though the well's state at this time may imply the presence of a malevolent spirit.

Bongo Bongo's name is a reference to the bongo drum on which the battle takes place.