Zeldapedia
Register
Don't have an account?
Sign In
Advertisement
in: Articles with non-canonical information, Articles incorporating theory, Masks,
and 6 more

The Bunny Hood (ウサギずきん,, Usagi Zukin?) is a recurring mask in the Legend of Zelda series. As its name suggests, the mask resembles the upper head of a rabbit, including the eyes and ears. The ears will flop around due to a "jiggle-bone" program when Link walks or perform most other movements such as using the sword and/or jumping.

"My long time dream! Returning to the wild life! Finally, the actor, stage and prop have been united!"
— Running Man

The Bunny Hood is part of the Happy Mask side quest. It is the fourth and final mask that Link can lend from the Happy Mask Shop and sell for the Happy Mask Salesman. The mask has one special ability — while wearing it in Hyrule Field at night, Stalchildren will not rise from the ground.

The Bunny Mask can be sold to the Running Man found in Hyrule Field after the completion of the game's third dungeon, Inside Jabu-Jabu's Belly. During the day, the man runs around Hyrule Field ceaselessly, but at night, he stops to rest. The man is trying to emulate a long-extinct breed of bunnies that once were common in Hyrule. Upon seeing the Bunny Hood, he realizes that the mask is the final piece he was searching for to fulfill his dream. He gives Link as many Rupees as his current Wallet can carry. As such, it is very useful to have obtained the Giant's Wallet by collecting 30 Gold Skulltula Tokens before selling the mask. After the mask has been sold, the man's running speed increases considerably, so much that Link will be knocked over if he gets in the way. After trading this mask away and returning the fee to the Happy Mask Salesman, Link completes the side quest and can obtain the Mask of Truth.

"You got the Bunny Hood! My, what long ears it has! Will the power of the wild spring forth?"
— In-game description

The Bunny Hood is one of twenty-four masks that can be obtained in the game. It can only be obtained by completing a Bombers' Notebook quest.

In the Cucco Shack at Romani Ranch, Grog lives together with his Cucco Chicks. He fears that the impending destruction of Termina may prevent him from seeing his friends grow into fully-grown Cuccos. Link dons the Bremen Mask and parades around the cuccos. Once Link has rounded them all up, they transform into adults. Grog is overwhelmed at seeing all his cuccos grown up and says that he doesn't have "regrets about anythin' anymore" and that he is "perfectly satisfied." He rewards Link with the Bunny Hood for all his work.

If Link talks to the Postman while he's playing his counting game, he will be startled. He will talk about his concentration and scorn Link for disturbing him. He then gives Link the opportunity to play the game himself. Playing the game while wearing the Bunny Hood causes the timer to stay on the screen instead of disappearing, making the game easier to win.

The Bunny Hood appears on the wall behind the counter in the Nintendo Gallery, along with the All-Night Mask, Goron Mask and Keaton Mask. Also, there is a headdress that looks similar to the Bunny Hood, worn by Maggie of Windfall Island after she becomes rich.

In the Majora's Mask DLC Pack, it is an unlockable Mask costume for Princess Zelda.

The Bunny Hood bears a resemblance to a Pols Voice, a recurring enemy in the series. This may not be a coincidence, however; when Link sells the Bunny Hood to the Running Man in Ocarina of Time, he states upon receiving the mask, "I bet with those long ears you can hear the voices." This quote may very well indicate a connection between the Bunny Hood and the Pols Voice.

The Bunny Hood itself may simply be a reference to The Legend of Zelda: A Link to the Past, in which Link becomes a bunny in the Dark World before obtaining the Moon Pearl.

The Bunny Hood is believed to be a reference to Peppy Hare, an anthropomorphic hare from the Star Fox series. Peppy is a decidedly positive and optimistic character, similar to Grog's attitude before presenting Link with the Bunny Hood. It is one of five masks that are a supposed reference to Star Fox, along with the Bremen Mask, Don Gero's Mask, the Keaton Mask, and the Mask of Scents.

The merchant Ravio from The Legend of Zelda: A Link Between Worlds wears a large purple rabbit hood when he travels to Hyrule. The hood conceals his status as Link's Lorulean counterpart until he finally removes it when convincing Princess Hilda to return Hyrule's Triforce. The hood itself acts as both a reference to Bunny Link and the Bunny Hood itself. Presumably it may also be the Lorulean counterpart of the Bunny Hood as Ravio originates from Lorule. In The Legend of Zelda: Breath of the Wild, the ears of Ravio's Hood that can be worn by Link flop just like the Bunny Hood's ears and similarly increase Link's sideways climbing speed (which is a tongue-in-cheek reference to Ravio's Bracelet which allowed Link to merge with walls) much like how the Bunny Hood increases running speed in Majora's Mask. 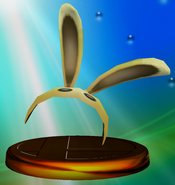 The trophy of the Bunny Hood from Super Smash Bros. Melee 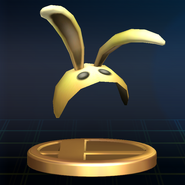 The trophy of the Bunny Hood from Super Smash Bros. Brawl

The trophy of the Bunny Hood from Super Smash Bros. for Nintendo 3DS / Wii U
Community content is available under CC-BY-SA unless otherwise noted.
Advertisement