Zeldapedia
Register
Don't have an account?
Sign In
Advertisement
in: The Legend of Zelda: Spirit Tracks bosses

This page is about the boss. For the character, see Byrne.

Byrne (勇往神魔 ディーゴ, Yūō Shinma Dīgo?, Dihigo, Driven Dark Spirit), also known as Staven, is a boss from The Legend of Zelda: Spirit Tracks. After Link beats the first four temples, he returns to the Tower of Spirits. On the twenty-third floor, Link encounters Byrne, who challenges Link and Princess Zelda to beat him in a "battle ring".

Once the battle begins, Byrne jumps around on the pillars scattered throughout the room, throwing balls of blue energy at Link and Princess Zelda, although these do not hurt Zelda. He will also occasionally fire a large sphere of blue energy that will stun Princess Zelda if it hits her. After a while, he throws his gauntlet, which must be dodged. Link must draw a path for Zelda in order to get his hand, causing him to topple over, allowing Link and Zelda to damage him with their respective swords. If Link is hit, he will steadily lose health until Zelda frees him.

After having sustained a certain amount of damage, Byrne will drop to the ground and fight. Byrne attacks by slashing Link with his clawed gauntlet, and attempting a charging attack. If Zelda attacks him as he charges, she will grab his hands and hold him in place, allowing Link to circle around to his back and damage him. Byrne will occasionally jump back onto one of the pillars and fire shock waves. After sustaining enough damage, Byrne is defeated. If Link begins to play the Spirit Flute during the battle, Byrne will stop and close his eyes and say "...that sound..." before continuing to fight. 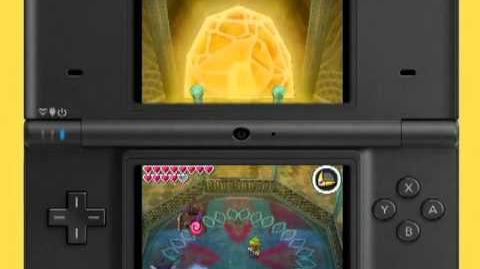