Zeldapedia
Register
Don't have an account?
Sign In
Advertisement
in: The Legend of Zelda: The Minish Cap locations
English

Castor Wilds is a location from The Legend of Zelda: The Minish Cap. It is a large swamp in the southwestern area of Hyrule. The entire swamp is filled with almost nothing but mud and mire. Despite these conditions, Castor Wilds at one time did have people living in it; these people were known as the Wind Tribe, and they settled within the Wind Ruins in the southern half of the swamp. These ruins were built around the Fortress of Winds. The tribe eventually left the area, leaving it uninhabited except for a Forest Minish, sword trainers Swiftblade the First and Scarblade, and a Deku Scrub, as well as various enemies.

To get across Castor Wilds in order to reach the Fortress of Winds, Link must dash across the marshlands within the swamp with his Pegasus Boots to get onto dry land. It is in the Castor Wilds that Link obtains the Bow. In the southwestern area of Castor Wilds can be found the Mysterious Statues, the three statues that Link must fuse Kinstones with in order to enter the Wind Ruins.

If Link uses the Picori Portal found in the northwest corner of the Castor Wilds and traverses through to the southeast corner, he can swim into a small cavern containing Scissors Beetles, Blue Mulldozers, and a Piece of Heart. 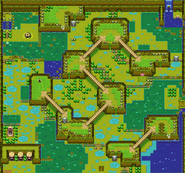 A map of Castor Wilds
Español
Community content is available under CC-BY-SA unless otherwise noted.
Advertisement