Zeldapedia
Register
Don't have an account?
Sign In
Advertisement
in: Articles with non-canonical information, The Legend of Zelda: Phantom Hourglass bosses
English

Sand of Hours
Spoiler: Spirit of Courage Half
Heart Container

After Bellum defeated the Ocean King and sealed him away, he used the deity's life force to create Crayk, who was sent to the Temple of Courage to imprison the Spirit of Time and Courage, Ciela.

However, Ciela was able to catch wind of the attack and split her soul to escape; her spirit powers were sealed away by Crayk, who took up residence in the temple to ensure no one would try and reclaim them.

Crayk has the ability to make itself invisible. It also sends out many smaller and weaker versions of itself to attack and distract Link. When at arm's length, Crayk violently grasps and squeezes Link with its massive claws. Crayk's point of view is shown on the top screen of the Nintendo DS, which allows Link to know when Crayk is approaching. To defeat Crayk, Link must shoot it in the eye with the Bow to stun it and make it retreat inside its shell. Once hit, Crayk becomes temporarily visible, allowing Link to attack the weak points on its shell and eventually break it. To avoid being knocked back by the spinning creature, Link can alternatively shoot all the weak points with his bow.

When Crayk's shell has been destroyed, Link can attack its vulnerable body with his sword, although he must strike at its face first for an opportunity to get behind it. When Crayk has taken enough damage, it is destroyed. Upon Crayk's defeat, Link receives more Sand of Hours for the Phantom Hourglass, half of the Spirit of Courage, and a Heart Container. 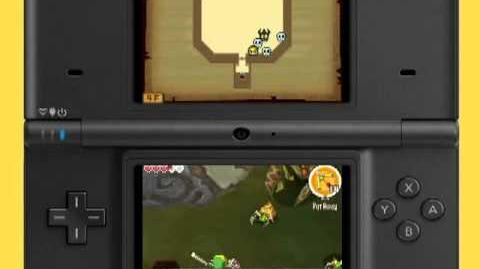 Crayk first appears on the Isle of Gust, where it kidnaps a little girl, whom is secretly the Spirit of Courage. Link then travels to Molida Island to rescue her. After arriving, Link finds the girl on the beach. After Link gets closer, Crayk attacks with its pincers, and Link ends up getting caught in them. Linebeck notices the Spirit of Courage is holding a bow. He quickly takes the bow and throws it to Link, who uses it to fire an arrow at Crayk's eye, allowing him to stab it with his sword. Upon defeat, Crayk leaves behind more Sand of Hours.

Crayk may refer to Link having to crack Crayk's shell in order to defeat it. The name may also be a reference to crayfish.