Zeldapedia
Register
Don't have an account?
Sign In
Advertisement
in: Articles with non-canonical information, The Legend of Zelda: Phantom Hourglass bosses
English

"Careful! That bloated beast can summon cyclones! Your sword won't reach it, not while it's way up there! There must be some way to attack it, though!"
— Ciela

Cyclok, Stirrer of Winds (竜巻魔空魚 フーオクタ, Tatsumaki Makūgyō Fūokuta?, Tornado Demon Sky Fish: Fuocta) is the boss of the Temple of Wind, the second dungeon in The Legend of Zelda: Phantom Hourglass. It is what appears to be a large Octorok who has the power to summon powerful cyclones.

After Bellum defeated the Ocean King and sealed him away, he used the deity's life force to create Cyclok, who was sent to the Temple of Wind to imprison the Spirit of Wisdom, Neri. Cyclok remained in the temple and ensure no one would try and free the spirit, plaguing the island with fierce winds.

Cyclok stays out Link's reach for most the battle, hovering in the skies above. He periodically flies to the ground to run into Link. Furthermore, Cyclok summons mini-cyclones that twirl on the ground. In order to damage Cyclok, Link must first knock it out of the sky by tossing a Bomb or Bomb Flower into a mini-cyclone below it. Cyclok then crashes to the floor, becoming vulnerable to Link's sword. After a few hits, Cyclok creates a cyclone and flies back into the air. After several cycles, Cyclok is defeated. 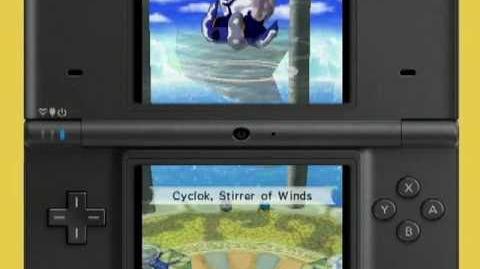 Cyclok appears on the shore of Isle of Gust, stirring up a cyclone, sweeping up Ciela's memories, and making it impossible for Link to attack. However, Linebeck grasps a Bomb Flower to resist becoming swept into the cyclone. Afterwards the Bomb Flower explodes, weakening Cyclok. Realizing the effectiveness of the Bomb Flowers, Link launches another one at Cyclok, striking and grounding it, allowing him to finish off the beast.