"Whoa... Human?! What business does a human have coming here?! None! No business! This is a forbidden place! I will protect this treasure from you!"
— Dangoro

Dangoro is a mini-boss from The Legend of Zelda: Twilight Princess. A massive Goron stationed in the Goron Mines, he is charged with guarding the Hero's Bow, and is outfitted with special metal armor. Unlike the majority of his race, Dangoro's eyes are blue rather than purple.

When Link ventures into the Goron Mines to free Darbus from the Fused Shadow's power, he eventually runs into Dangoro. Distrusting non-Gorons, Dangoro is unaware that Link was permitted access into the mines. Because of this, Dangoro and Link do battle on a tilting magnetic platform over a pool of lava. Link eventually tosses Dangoro into the lava, knocking his helmet off in the process. After Link repeats this process two more times and deals enough damage, Dangoro gives up and listens to Link, who explains that he is allowed in the Goron Mines to rescue the Patriarch of the Gorons, Darbus. After learning this, Dangoro steps aside and lets Link pass into the next chamber, which contains the Hero's Bow.

Following this chain of events, Dangoro never appears or is mentioned for the rest of the game.

The actual battle with Dangoro takes place on a magnetically charged platform shaped as a hemisphere. As Dangoro jumps up on it, it falls into the pit of lava below. While Dangoro has no problems staying on the platform, Link might slide off if he is close to the edge. The Iron Boots will prevent him from sliding off due to the magnetism.

Dangoro can deal out deadly uppercuts and use his weight and strength to rock the entire platform. However, he is quite slow and leaves himself open to attack while winding up his attacks. The Shield Attack can also leave him open to attack for a brief moment. Additionally, he can also be made vulnerable for a very brief time by hitting him in the face with a Slingshot pellet, though Link will probably only be able to land one sword strike before Dangoro recovers. If Dangoro is attacked at this point, he will roll into a ball and try to knock Link off the platform to counter-attack. With the Iron Boots on, Link can intercept him and throw him backwards into the lava if he is close enough to the edge of the platform. Once Link manages to throw him into the lava surrounding the platform three times, the battle is won. The battle stage and fight is mimicked when Link faces off against Zant. 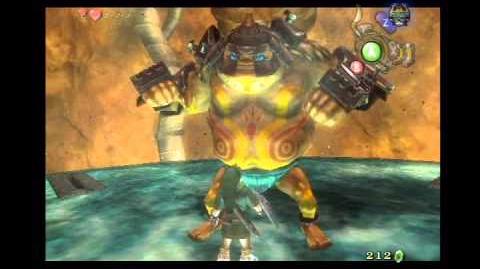 Dangoro's name is a portmanteau of the English word dangerous and Goron; therefore, his name could mean "a dangerous Goron".

Dangoro as he appears in-game
Español
Community content is available under CC-BY-SA unless otherwise noted.
Advertisement