Zeldapedia
Register
Don't have an account?
Sign In
Advertisement
in: Articles with non-canonical information, Hylians, Kings,
and 2 more
English

Daphnes Nohansen Hyrule (ダフネス・ノハンセン・ハイラル, Dafunesu Nohansen Hairaru?) is a character from The Legend of Zelda: The Wind Waker. Once the great King of Hyrule, he was sealed beneath the Great Sea along with the rest of Hyrule during the events of the Great Flood. Daphnes Nohansen Hyrule controls a boat named the King of Red Lions. During his search for a hero, he finds Link, whom he guides through his adventure. He created the Pirate's Charm, which he uses to communicate with Link over long distances several times during his quest. He is also presumably the father of the Antediluvian Princess who is also the ancestor of Tetra and her mother.

Unlike most of Link's companions from other installments of the series, the King of Hyrule is generally pleasant toward Link from the moment the two meet, frequently guiding and encouraging him during the course of his adventure. It is presumed that, judging by the scenes at the end of the game, he had inadvertently come to be viewed by Link as a possible father figure.

It is quite possible that the King of Red Lions is actually a ghost bounded to the remains of Hyrule. This would explain his mysterious past and powers (arguably though, he may have had these powers before his presumed death) although it is questionable why (assuming he is a ghost) he is different from other ghosts in terms of being able to normally interact with others as well as use items without a problem (with most ghosts seemingly unable to do so without some sort of help).

During the events of the Great Flood, Daphnes Nohansen Hyrule was King of Hyrule. Unable to defeat Ganondorf after he returned to power, the king and his people hoped the Hero of Time would reappear. However, the Hero did not appear and after appealing to the gods of Hyrule for aid, the land of Hyrule was sealed beneath a gigantic torrential downpour; those chosen to find a new country fled to the mountain tops. From this point onward, Daphnes Nohansen Hyrule waited in the submerged Hyrule Castle for a hero to appear and save the world.

The Hero of Winds

While controlling the King of Red Lions, Daphnes Nohansen Hyrule finds Link floating unconscious in the middle of the Great Sea, having been thrown by the Helmaroc King from the Forsaken Fortress. He guides Link through his quest to find the Pearls of the Goddesses that will uncover the location of the Tower of the Gods, where Link opens the way to Old Hyrule. He then instructs Link to find the Master Sword in Hyrule Castle and use its power to defeat Ganondorf. However when Link attempts to use the Sword to defeat Ganondorf he is easily overpowered and it is revealed that the sword has lost its power.

After Link and Tetra are rescued from Ganondorf's clutches, Daphnes Nohansen Hyrule takes them back to Old Hyrule and presents himself to Link and Tetra revealing to them that he is the King of Hyrule as well as the King of Red Lions. The king then tells Tetra that she is to be awakened as Princess Zelda, destined to wield the Triforce of Wisdom. The king then determines that the reason behind the Master Sword's loss of power is that something must have happened to the sages that powered it, so he accompanies Link on his quest to awaken the sages and restore the Master Sword to its full power, while Zelda remains hidden within Hyrule Castle, at the bottom of the sea.

Daphnes Nohansen Hyrule helps Link to discover a portal to the surface world inside Ganon's Tower that Ganondorf uses to return to the world above. He then appears on the top of Ganon's Tower and claims the Triforce before Ganondorf. The king wishes for what was left of Hyrule to be washed away to prevent Ganondorf from claiming it. He also wishes for Link and Princess Zelda to have a future. Ganondorf laughs and scoffs at the idea, telling Daphnes Nohansen Hyrule that he'll give them their future, and starts to duel Link, only to be defeated.

As Hyrule continues to be drowned by the sea, Daphnes Nohansen Hyrule apologizes that the inheritance left by their ancestors would be no more. He refuses Zelda's offer of finding a land to be the next Hyrule claiming that it would not be Hyrule, but it would be their land. As the water from the sea above comes crashing down, he watches as Link and Zelda raise to the surface while choosing to stay behind as he and his kingdom are washed away beneath the sea, with his final words being "I have scattered the seeds of the future." As Link is surrounded in a bubble and begins to float to the surface, he looks back down at the King of Hyrule and attempts to swim down and touch his hand. The King of Hyrule begins to raise his own hand to meet Link's, possibly implying a small desire to go with him; ultimately, he lets it fall to his side and disappears with the remains of Hyrule. 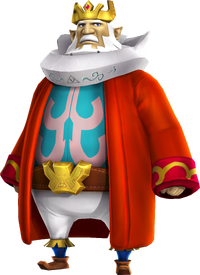 "With a portal to the Era of the Great Sea opened, the King of Red Lions himself came through to aid the legendary hero in his cause. King Daphnes Nohansen Hyrule was an ancient land's final king, forced to watch his home fade into legend under the Great Sea. He also helped Toon Link in the guise of a red boat. Harking back to his times as that red boat, King Daphnes purges evil from this world with a powerful sail, and even changes back into a boat during certain attacks."
— King Daphnes, the King of Red Lions in-game tutorial Bio

Daphnes Nohansen Hyrule appears as a character in the Nintendo 3DS port of Hyrule Warriors, along with Tetra, Toon Link, and Medli. He is able to transform into the King of Red Lions and uses his Sail as a weapon in order to attack enemies. By synchronizing the game with the Wii U version, he will be playable in the Wii U game as well.

Like many locations in Breath of the Wild named after a character from a previous game, the Mount Daphnes is named after him.

Daphnes Nohansen Hyrule is featured as a sticker. His sticker gives a +31 bonus to electric attacks, and can only be applied to Link, Toon Link, Zelda, and Ganondorf.

King Daphnes introduction in the stylized cutscene for Wind Waker: The Search for Cia from Hyrule Warriors Legends
Español
Community content is available under CC-BY-SA unless otherwise noted.
Advertisement