"I was summoned from the Dark Realm by Twinrova. See my true form! Feel the might of a dark dragon!"
— General Onox

The Dark Dragon has four different attacks. His first attack consists of attempting to smash Link with either one of his hands. His second attack is to sweep one of his hands across the screen. Either of these first two attacks can easily be blocked using the Iron Shield, moving Link out of harm's way. His third attack is to shoot blue fire out of his mouth, which linger on the screen for several seconds. His final attack is shooting a large amount of fireballs down the screen sweeping from left to right while alternating between firing left and right.

This battle is fought in a side-scrolling fashion. The dragon's body is completely impervious to any attack, but his one weakness is the red jewel on his head. If Link strikes the jewel enough times, the Dark Dragon is eventually defeated. This is easier said then done; in order to even reach the jewel, Link must dodge one of the Dark Dragon's hand attacks and then jump onto his hand. After this, Link must jump from the hand to the jewel and hit it with his sword in midair. If timed right, Link can land on the Dark Dragon's other hand after slashing his face. 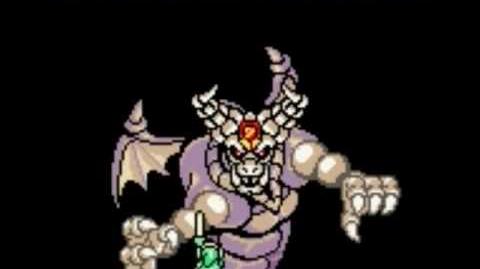 The Dark Dragon from the Oracle of Seasons manga.
Español
Community content is available under CC-BY-SA unless otherwise noted.
Advertisement