Zeldapedia
Register
Don't have an account?
Sign In
Advertisement
in: Previous featured articles, Articles with non-canonical information, The Legend of Zelda: Oracle of Ages enemies,
and 11 more
English

This article is about the recurring enemy. For the character from Four Swords Adventures, see Shadow Link.

) is a recurring antagonist in the Legend of Zelda series. This shadow doppelgänger of Link is able to utilize many of Link's own attacks, often mimicking him. It is unknown if any of Dark Link's appearances across games represent the same entity, or if each game features its own unique Dark Link (although considering how most incarnations of Link are different to one another, it is likely the same applies to their doppelgängers). It is also never revealed whether he serves some master, or fights of his own accord; as neither his sapience nor sentience is confirmed in the first place. Multiple Dark Links occasionally appear together but it is unclear if each of them possess an individual consciousness, or if they are all just aspects of the same being.

Dark Link serves as the final boss of the game, found inside the Great Palace. After the defeat of Thunderbird, Link enters the final chamber of the palace, where the Triforce Keeper holds the Triforce of Courage. Suddenly the lights go out, and Link's shadow jumps away from his body and proceeds to attack with its sword. It is eventually defeated by Link, who awakens Princess Zelda after the ordeal. Dark Link is never described as one of Ganon's servants; the more likely scenario is that it was a final test left by the King of Hyrule who hid the Triforce of Courage. It should also be noted that Dark Link is never referred to as such in The Adventure of Link; most official documentation that refers to it at all identifies it as Link's shadow, suggesting that it might be a different entity from other Dark Links.

The Legend of Zelda: A Link to the Past (GBA Port)

Dark Link appears only in the Game Boy Advance port of A Link to the Past. After clearing several sub-challenges included in The Legend of Zelda: Four Swords and A Link to the Past itself, Link is allowed to enter the Palace of the Four Sword, whose entrance is found on the outside of the Pyramid. In the palace's final room, Link must battle four Dark Links, who wear tunics corresponding to the colors of the Links who hold the Four Sword: green, red, blue, and purple. Each Dark Link has a different power, as well as the powers of the previous ones. These include Link's Dash Attack, Sword Beam, Downthrust, and Whirlwind Sword Attack.

Dark Link is the mini-boss of the Water Temple, appearing as a shadow-like Link in a strange, illusionary room. Its voice is the same as Link's, only with a much deeper pitch. It acts as a mirror of Link, mimicking all of his sword attacks, making it infamously hard to damage it using the Master Sword. As the battle continues, Dark Link gradually becomes less 'see-through', starting translucent and becoming a more opaque. When Link defeats it, the illusionary tree and pond disappear, and the door forward opens. The next room holds the treasure that Dark Link was guarding, the Longshot.

The game's main antagonist and final boss, Veran, summons four Dark Links at the start of the second phase of the final battle. These copies are significantly weaker than the real Link, and are mainly used by Veran as a distraction. They move in the opposite direction to the one Link is walking in, much like Arm Mimics. They cannot attack save for bumping into Link, and always drop a heart upon defeat.

In a flashback sequence told to Link by Lanayru, what appear to be three Dark Links are used to symbolize the Interlopers that once attempted to establish dominion over the Sacred Realm. Dark Link is not fought in this game, however, and is merely a visual tool.

Dark Link appears as the final enemy of the Take 'Em All On mini-game in Castle Town. It is able to use the Great Spin Attack, the Bow, and bombs, while Link is limited to using his sword. Dark Link appears as a literal shadow, and becomes more transparent as he is damaged, fading away entirely upon defeat.

Three Dark Links appear on the thirty ninth floor of the Den of Trials. They wield upgraded versions of Link's standard weapons and can place a Jinx on Link using their sword.

In Breath of the Wild Dark Link does not appear as a character or an enemy. However he is referenced through the "Dark" armor set. It is a set of clothing crafted by the monster researcher Kilton after a monster born of shadows. This outfit transforms Link into a monster, causing him to resemble Dark Link, and increases his movement speed at night. The clothing set consists of the Dark Hood, Dark Tunic, and Dark Trousers. The Dark Hood causes Link's eyes to glow like Dark Link's eyes in Twilight Princess and Ocarina of Time. Additionally the set causes Link's skin to appear pale gray and his hair to appear white. However the set's overall design is an dark inversion of the Hero of Time armor set, which implies it based on the incarnation of Dark Link from Ocarina of Time with a few design elements from Twilight Princess, thus making Link resemble an updated more realistic version of the Dark Link from Ocarina of Time. However it also resembles Dark Link's design from Ocarina of Time 3D. This marks the first time in the main series where Link can wear an outfit that makes him look like Dark Link.

The Dark Tunic's description implies that Dark Link's clothes are spurious replicas of Hero's Clothes, thus implying that the armor set is a dark replica of the Cap of Time, Tunic of Time, and Trousers of Time that were worn by Dark Link in Ocarina of Time.

The set becomes available for purchase at the Fang and Bone only after Link has freed all four Divine Beasts.

Dark Link appears in the spinoff game Hyrule Warriors, where he represents the darkness in Link's own soul.

When Link finally obtains the Master Sword, he starts to become overconfident in his own abilities. Sensing this, Cia takes advantage of this and pulls out the darkness in his heart to create the doppelgänger out of his shadow. He fights one, but then four more appear, as Link still harbors arrogance in his heart, which also obstructs the Master Sword's true power. Eventually, he becomes trapped in a room where he is nearly overwhelmed by Dark Links, but is saved by his allies at the last minute. Link then realizes his limits and discovers the power of friendship and cooperation (the character of a true hero), Thus, all the Dark Links disappear and the Master Sword shows its true power.

In Cia's Tale Darkness Falls, Cia summons Dark Links to replace Wizzro and his Icy Big Poes that had defected to Ganondorf's Forces, while Cia descends further into her madness say that the Hero will protect her (meaning she views her Dark Links as if they where the real Link). Cia's use of the Dark Links can also be seen as another example of her obsession with Link.

Dark Link also appears as an alternate costume for Link, which is obtainable by purchasing the Hero of Hyrule DLC pack. The Dark Link outfit has the special attribute of effecting the color of Link's weapons to match Dark Link's black shadowy coloration. Additionally it will also turn his Great Fairy and Epona weapons into Dark versions (possessing red eyes and black shadowy coloration) of them. Cia (as a playable character) is able to summon Dark Links with her Scepter moveset.

Toon Link has his own Dark counterpart, in the form of Dark Toon Link. Like Dark Young Link, he is encountered as an enemy in Adventure Mode and has the same moveset & drops the same materials as Toon Link.

Dark Link makes a cameo appearance in Super Smash Bros. Melee as the opponent of the event match "Link's Adventure". It is depicted as an entirely black version of Link's character model. Interestingly, Link appears in his red palette swap for this battle, possibly as a nod to the Shield Spell from The Adventure of Link.

Dark Link is available as a palette swap for both Link and Toon Link in both Super Smash Bros. Brawl and Super Smash Bros. for Nintendo 3DS / Wii U. This skin closely resembles the representation of the Interlopers seen in Twilight Princess. Interestingly, it affects the color of Link's Hylian Shield, but does not affect the Master Sword. Dark Link also appears as a boss in the event mode in Brawl, where it has 200HP. Despite the event mode Dark Link displaying a picture of the palette swap version over its damage meter, it appears completely black, similar to the Dark Link in Super Smash Bros. Melee.

The Legend of Zelda series manga

Dark Link appears in the manga adaptation of Ocarina of Time, where he presented as an amalgamation of his game counterpart and Bongo Bongo. While Link is training with Impa in Kakariko Village, Dark Link appears from the well and attacks Link. It appears to know every technique Link uses, but is eventually defeated when Link performs a new move he learned by watching Impa. The battle continues when Dark Link quickly reappears astride a dark horse, but Link dispatches his foe yet again with the help of Epona.

In the Valiant Comics story "Coming Home," Link returns to his home country Calatia to find that a tyrant identical to him has usurped the throne. Seline, the rightful queen, demands that Link be allowed to battle this impostor—and backed by the will of the people, her wish is granted. During the battle, both Link and his lookalike end up hanging off the edge of a bridge, and Link realizes that his opponent is the shadow of himself he had fought before.

During this story, the impostor also assumes Zelda's likeness, implying that it can assume the form of anyone it wishes. 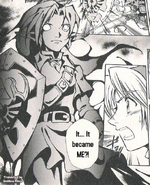 Dark Link in the Ocarina of Time manga

Dark Hood from Breath of the Wild

Dark Tunic from Breath of the Wild