"Doesn't he know how dangerous that is, swinging a big metal ball around in such a small place?! It's too dangerous to get close to him, so let's use the ceiling to get over to his other side!"
— Midna

Darkhammer is the mini-boss fought in the Snowpeak Ruins, the fifth dungeon in The Legend of Zelda: Twilight Princess. A massive creature clad in heavy armor, he wields the Ball and Chain. His attack strategy is very similar to that of Ball & Chain Troopers found in previous Legend of Zelda games. Darkhammer bears a large resemblance to a Lizalfos or Dinolfos and a combination of a Darknut. It also has a vulnerable tail, much like a Dondongo.

Darkhammer appears at first to be a harmless suit of armor on one side of the room, with another suit of armor on the opposite side of the room mirroring him. When Link tries to exit the room, however, he destroys the other suit of armor, then focuses on Link for battle. Darkhammer fights with a long Ball and Chain. Though most boss and mini-boss fights take place in large circular rooms, the Darkhammer is faced in a narrow hallway, making his weapon even more effective and very hard to dodge. There are Clawshot designs on the ceiling, helping Link escape from Darkhammer's attacks. The designs are somewhat token, however, as the entire ceiling can be locked onto by the Clawshot.

The easiest way to defeat Darkhammer is to stay at the very end of one side of the room, and as Darkhammer approaches, use the Clawshot to get as far away from him as possible, then roll to the other end of the room where the Darkhammer is not standing. Link will hear a clank as the Darkhammer throws the ball and misses, at which point Link has a chance to get behind Darkhammer and attack his tail as he attempts to pull the ball and chain back, which takes a little longer than Link would take when he uses the ball and chain. Darkhammer can be defeated instantly by a single hit from the Mortal Draw, though it can be difficult to execute during the limited time it is pulling in its ball and chain. When defeated, he leaves the Ball and Chain available for Link's taking. 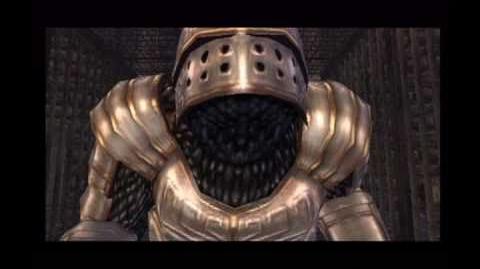 Retrieved from "https://zelda-archive.fandom.com/wiki/Darkhammer?oldid=469031"
Community content is available under CC-BY-SA unless otherwise noted.