"This thing just depresses me... Get him down here and introduce him to your blade!"
— Midna

Death Sword is the mini-boss of the Arbiter's Grounds, the fourth dungeon in The Legend of Zelda: Twilight Princess. A giant sword and its ghostly wielder combine to make the mini-boss. Upon entering the room, Link finds the sword and breaks the seal on it by cutting one of the "ropes" that held it. The spirit appears and battles him.

At the beginning of the battle, the spirit is invisible to the naked eye, but Link can see it by transforming into his wolf form and using his beast senses. Death Sword usually remains intangible, but can be struck after attacking. Once it has been damaged by Wolf Link, Death Sword will become visible by normal means and remain tangible. In this form, it is vulnerable to direct attacks, and as such, will stay out of Link's reach while firing magic bolts. It will also occasionally return to its previous strategy of becoming invisible.

A hit from an arrow, the Clawshot, or the Gale Boomerang will anger Death Sword and make it circle around Link in hopes of confusing him before coming in to attack again. By combining wolf and human attacks the Death Sword can be easily defeated, at which time it explodes into hundreds of locusts that disappear though a hole in the ceiling. The room lights up again and a chest containing the Spinner appears. 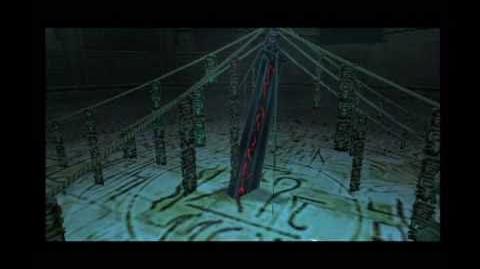 It is possible that the seal which bound Death Sword was created by the Ancient Sages, given that they are seen in the Arbiter's Grounds on two occasions.

It is unknown exactly why or how the sword became sealed within the Arbiter's Grounds. Considering its name, its possible that the sword was originally used for executions within the prison (similar to the Sword of the Six Sages which was also used for this purpose), but eventually became possessed by an evil spirit (possibly one of the prisoners or developed its own demonic spirit over the course of its use as an execution blade) and was sealed away by the Ancient Sages. Another possibility is that it may have originally belonged to Ganondorf and sealed away after his imprisonment due to its evil nature.

Spirit of the Death Sword

It is possible that the spirit that wields it is actually the sword's spirit, similar to Fi and Ghirahim. Alternately, it is the spirit of a prisoner who may have become attached to the blade in death.

Death Sword's sword in the ground before it is freed
Español
Community content is available under CC-BY-SA unless otherwise noted.
Advertisement