Zeldapedia
Register
Don't have an account?
Sign In
Advertisement
in: The Legend of Zelda: The Minish Cap dungeons
English

"Deep within the Minish Woods, you will find a place called Deepwood Shrine. Once, humans and Picori shared that shrine as a meeting place. I think it would be best if you started your search there."
— King Daltus

Deepwood Shrine is the first dungeon in The Legend of Zelda: The Minish Cap. It is located in the Minish Woods.

Despite it being called a "shrine," the dungeon is, based on its size, more like a temple (to one Minish sized). It is a short distance to the north of the Minish Village, and Link is only able to enter after being shrunk to Minish size by Ezlo and receiving permission from the local elders Festari and Gentari.

Link enters the shrine after learning that in order to reforge the true Picori Blade and revive Princess Zelda, he must collect the Four Elements, the first of which is to be found in said shrine.

The dungeon has a forest theme at times and contains enemies resembling mushrooms and caterpillars. Its centerpiece is a large barrel on an axle which rotates when Link moves inside it, allowing access to different sections of the shrine. The dungeon item is the Gust Jar, and Link uses it to move leaves and clouds of dust to clear a path through the dungeon.

The bottom floor of the dungeon is largely submerged in water. Since Link visits this dungeon before receiving the Flippers later in the game, the only way he can traverse this floor is by floating on a Lily Pad, propelled by the Gust Jar. 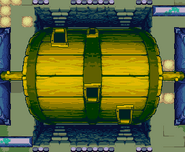 The barrel found in the central room
Español
Community content is available under CC-BY-SA unless otherwise noted.
Advertisement