"Hit it when it lunges at you, and it will stand upright. Cut it quickly to get a Deku Stick!"
— Navi

Deku Babas (デクババ, Deku Baba?) are recurring enemies in the Legend of Zelda series. They are a species of carnivorous plants, somewhat similar in appearance to the real-life Venus Flytrap and Piranha Plants from the Super Mario Bros. series. In every game they have appeared in, Deku Babas have blue heads and pink mouths and only slightly vary in appearance. Deku Babas sprout from the ground whenever their roots detect any potential prey. They attack by quickly lashing out at an enemy without provocation.

Depending on the game and method used to defeat one, a fallen Deku Baba will often yield a Deku Stick, Deku Nut, or Deku Seeds.

Deku Babas can first be found in the path in Kokiri Forest that leads to the meadow of the Great Deku Tree. There are two kinds of Deku Baba: a normal kind and a withered type, the latter only capable of attacking if Link walks into it. When struck by certain attacks, a normal Deku Baba will recoil and straighten its stem, at which point it can be cut, causing the stem to form a Deku Stick. Withered Deku Babas will constantly remain pointed upward, making it easy for Link to harvest Deku Sticks from them, though they occasionally spin in a attempt to hit Link.

During the seven years that Link is sealed inside the Sacred Realm, Ganondorf puts a curse on Kokiri Forest, greatly increasing both the number and size of Deku Babas in the area. Link successfully breaks the curse by defeating Phantom Ganon in the Forest Temple and freeing Saria, now the Sage of Forest. As a result, the Deku Tree Sprout is allowed to grow and the evil Deku Babas are banished from Kokiri Forest.

In Master Quest, withered Deku Babas, rather than regular ones, appear in the entrance hall of the Deku Tree.

Deku Babas are similar to their counterparts in The Legend of Zelda: Ocarina of Time, with both regular and stemless varieties appearing. Regular Deku Babas do not stand up straight as often though when struck. They can be encountered in various areas of Termina, but are most prevalent in areas of the Woodfall region. A common recurring layout of Hidden Hole contains, among other things, two Deku Babas which always stand straight and a single stemless Mini Baba, providing a convenient way to replenish Deku Sticks and Nuts, particularly useful given that these items are lost whenever Link loops time. In addition to Withered and normal Deku Babas, their are also two related species, Mini Babas and Bio Deku Baba. Mini Babas lack a stem and always leave behind Deku Nets when killed, serving as a counterpart to Withered Deku Babas. Bio Deku Baba are semi-aquatic and often found attached to the bottom of lily pads. Unlike most Babas, Bio Deku Babas can survive after their stem is cut while at the same time granting them mobility.

Deku Babas appear in the Faron Woods as well as the Forest Temple and oddly enough, in the City in the Sky. They also appear in the grass near the stone column found near the Hyrule Castle Town's southern entrance.

In this game, they can attack by clamping onto victims with their jaws, immobilizing them until they manage to break loose. An easy way to escape is to use the Spin Attack. There is also a stronger variety of Baba known as the Baba Serpent. Massive Deku Babas also appear, called Big Babas, and live in conjunction with a large Deku Like. Twilit Babas are their Twilight counterparts.

When normal Deku Babas are defeated, their heads dry up into Deku Nuts which can be smashed to reveal Pumpkin Seeds, which can be used as ammunition for the Slingshot. Baba Serpents and Twilit Babas however can survive after their stem is cut similar to their cousins the Bio Deku Babas from Majora's Mask.

They and Baba Serpents are the only types of regular enemies not instantly killed by the mortal draw. Instead, they are stunned.

Deku Babas and their more advanced form, Quadro Babas, appear primarily in Faron Woods, but also in Lanayru Desert if a Timeshift Stone is active. They are the first enemies that Link encounters on The Surface when he first arrives in the Sealed Grounds. In order to defeat them, Link must slice his sword horizontally or vertically depending on which way their mouths are open, either with his sword or with a Skyward Strike. Unlike most enemies, Deku Babas take half damage from stab attacks even when Link has the Master Sword. Deku Babas can also dodge stabs after taking damage from stab attacks. Deku Babas may also be defeated by throwing a bomb into their mouths. Humorously Deku Babas also have a bad habit of gobbling up any lit bombs with in range of their mouth, unintentionally killing themselves when the Bombs explode. They will snap at thrown objects such as bombs or Timeshift Orbs, the latter of which can be used as a distraction for an easier kill. Link can also defeat a Deku Baba by using the Beetle to cut the Baba's stem. If Link performs a Shield Bash while a Deku Baba is attacking, he will stun the monster, allowing an easy kill. They will also occasionally hang down from ceilings, in which case they must be hit with a long range weapon, such as the Beetle or the Bow. Humorously, there is a Deku Baba that appears in the middle of sandy slope in Faron Woods (making running up said slope difficult), at the top of which are two Boulders Link can pick up and throw down the slope to kill the Baba easily. Later in the game, they are replaced by stronger Quadro Babas in certain areas such as Faron Woods.

"Deku Babas attack by spewing poison. They cannot be defeated by normal attacks, so you must find some other method of inflicting damage."
— Deku Babas Tutorial description

Deku Babas appear as field obstacle enemies that are surrounded by a poisonous gas. They are dispatched by arrows fired from the Bow obtained in The Sorceress of the Woods story scenario. They can only be killed with the Bow or its Item Power-Up, the Sacred Bow.

A Deku Baba is featured as a sticker. Its sticker gives a +4 bonus to arm and leg attacks, and can be applied to anyone.

Deku Babas take the place of Piranha Plants on Hyrule Circuit. They will lunge at racers who pass by, and will knock them over if they successfully bite them.

A withered Deku Baba from Ocarina of Time and Majora's Mask

A Bio Deku Baba attached to its Lily Pad 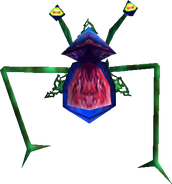 A Bio Deku Baba whose stem has been cut

A Deku Baba that must be sliced vertically from Skyward Sword 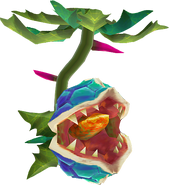