This page is about the character. For the boss battle, see Demise (boss).

"You fight like no man or demon I have ever known. Though this is not the end. My hate... never perishes. It is born anew in a cycle with no end!"
— Demise

, 終焉の者?, Shūen no Mono) Person of Demise is one of the two main antagonists of The Legend of Zelda: Skyward Sword, being the risen form of an ancient evil previously sealed by the goddess Hylia. He was voiced by Takashi Nagasako, who had previously voiced his reincarnation, Ganondorf, in Ocarina of Time to Four Swords Adventures.

He is a demonic entity with a humanoid appearance. His skin is made of what looks like dark scales, and in some parts bare with pale-gray. He is very muscular, with thick arms and neck. He wears a long, brown cape around his waist, embroidered with gold in a triangle pattern and held by a belt. His head is covered in flames in place of hair, and has a white, glowing scar on his forehead from what could be the spike embedded in his head while being The Imprisoned. It is worth noting, however, that according to Fi, Demise appears differently to everyone who sees him.

The sword he wields resembles a corrupted version of the Master Sword, its hilt being the same general shape, but with a different design to the quillons or "wings" that make up the handguard, the Triforce engraving being inverted, the blade being significantly larger with a flamberge-esque edge, and being an overall darker color.

Fitting his role as the Demon King, Demise is vicious and lacking in compassion, comparing mortals as being weak. Even though he apparently prides himself for his power, his thirst for power made him seek the Triforce, all while hurting and murdering innocent beings in his quest. He is also hateful of the Goddess Hylia, whom he somewhat begrudgingly respected. Despite this, however, Demise has some honor, agreeing to duel Link when challenged by him, and also taking his loss with stride while cursing the hero. He also seems to anticipate Link with some amusement, and states after his defeat that Link stands out as a paragon among the humans; he also admits that Link far surpasses him in the original Japanese version of the game.

As the Demon King himself, Demise has an incredible amount of power which makes him one of the most, if not the most powerful villain to appear. His powers can overwhelm even deities and makes him the supreme ruler of the Demon Tribe, striking fear into most beings. Even his sword Ghirahim, who has superb abilities himself, willingly follows his master without question.

Despite being sealed by Hylia, Demise somewhat broke the seal by himself (as The Imprisoned) three times. He can also open a portal to a different dimension, where he can summon lightning at will. Fi states that Demise has conquered time itself, further showing the potency of his powers; she also states Demise is the source of all monsters.

Though having immense potential, Demise's power is not absolute. He was sealed by Hylia in the past (not before mortally wounding her though), completely obliterated by the omnipotent Triforce's power in the present, and ultimately defeated by Link in their duel. Being an evil entity, Demise is vulnerable to the True Master Sword. He is however, much more resistant to its effects in comparison to his followers. 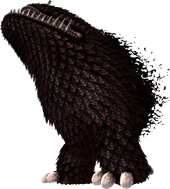 Though significantly weaker in his Imprisoned form, Demise is still a force to be reckoned with. In the form he appears as a large eyeless black scaled beast with a large mouth and the pillar used to seal him on his forehead. Unlike his true form, it is unknown if Demise retains any form of consciousness, since he is not shown speaking at any point. The Imprisoned gains new traits each time he escapes such as arms, a tail, and a demonic halo along with the ability to levitate. He is capable of producing shock waves of dark energy simply by walking. However, the sealing pillar and his white toes are his weak spots, though he is capable of regenerating his toes. He is also vulnerable to Bombs fired by the Groosenator.

Prior to the events of the game, emerging from underground, Demise led a campaign to obtain the Triforce, having his minions destroy everyone and everything in their path to get it. However, Hylia along with the help of others, seal away Demise, turning him into The Imprisoned and sealing him away within the Sealed Grounds. He did however, manage to mortally wound Hylia, although she later reincarnated into a Hylian.

During the events of the game, Ghirahim, Demise's sword, attempts to resurrect him, using Zelda's spirit as she is the reincarnation of the goddess herself.

Even without Ghirahim's help, however, Demise (as The Imprisoned) is able to break the seal on its own on a near regular basis. Shortly after Link returns from the Temple of Time, he fights The Imprisoned a first time; after obtaining the third Sacred Flame, Din's Flame, he fights The Imprisoned once again, with the help of Groose. Link then journeys into the past Temple of Hylia, where Zelda informs him that she is the reincarnated form of the Goddess, Hylia. She also tells him that the Mark of a Hero on his right hand is a sign that he can hold the Triforce; Link is informed that he must obtain the Triforce in order to defeat Demise. Zelda then seals herself into a large crystal and enters a deep slumber to keep Demise at bay.

Link returns to the present and learns from the Sky Spirit, Levias, that he must complete an ancient song known as the Song of the Hero that is broken into four parts in order to obtain the Triforce. On his journey to recover the pieces of the song from the Three Dragons, he battles The Imprisoned with Groose once more before obtaining Faron's portion of the song. Eventually, Link completes the Song of the Hero and returns to Skyloft, where he enters a final Silent Realm to prove his worth to the Goddess. Upon its completion, he is rewarded with the Stone of Trials, which he inserts into a statue and unlocks the entrance to the Sky Keep, the location of the Triforce.

Link navigates the Sky Keep and finally obtains the three pieces of the Triforce. Upon doing so, Fi informs him that he should wish for Demise's destruction; Link does so, and as he does, the Isle of the Goddess floats down to the ground and rests in the large gap in the Sealed Grounds, crushing The Imprisoned in the process. Fi confirms that Demise has been destroyed, and Zelda awakens.

Link, Groose, and Zelda have a short reunion before Ghirahim reveals his presence within the Sealed Temple. He quickly kidnaps Zelda, telling Link that he will simply use the Gate of Time and resurrect Demise in the past. He brings Zelda to the past and Link quickly follows. In the Sealed Grounds, Ghirahim begins performing a ritual on Zelda, and blocks off the cliffsides, forcing Link to battle with his horde of Bokoblins in order to reach him. When Link finally arrives, Ghirahim, provoked, begins battling Link for the final time.

Link defeats Ghirahim, but he is too late; Ghirahim's ritual is complete, and Demise absorbs Zelda's soul, returning to his true form in the process. Demise forces Ghirahim back into the true form of his blade while amazed to meet a living creature who shows the courage to face him. Impressed, Demise challenges Link to a battle, in which Link manages to defeat the malevolent being and restore Zelda's soul to her body.

With his final breaths, Demise vows that his hatred and the curse of the Demon Tribe (in the Japanese version) will be reborn in a cycle without end as it evolves, cursing those with the blood of the goddess and the spirit of the hero. After Demise's body dissolves, his residual consciousness is absorbed into the Master Sword to dissolve over time.

Demise's curse seems to signify the reasons for Ganondorf existences and the tribulations he causes for Link and Zelda's various descendants. This idea is supported by Demise's similar appearance to Ganondorf, Ganondorf's frequent appearances throughout the series, and Eiji Aonuma's statement that Ganondorf's appearance in The Legend of Zelda: Ocarina of Time would be hinted at in Skyward Sword. During the final battle against Dark Beast Ganon in The Legend of Zelda: Breath of the Wild, Demise, and by extension, his ties to Ganon were indirectly mentioned by Zelda, where she tells Link that Ganon's origins were that he was "a pure embodiment of the ancient evil that is reborn time and time again..."

In the Japanese script of the game, Demise's curse is expressly identified as the Curse of the Demon Tribe, suggesting it might be responsible for more villains than just Ganondorf. 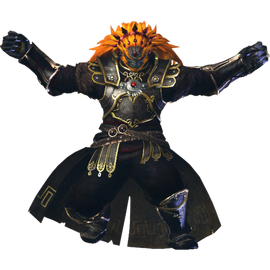 Although Demise himself does not appear in Hyrule Warriors, his alternate form, The Imprisoned, is a boss in the Skyward Sword chapter as well as the Cia's Tale DLC. In addition, Ganondorf's appearance in the game takes some cues from Demise, including a long mane of red hair and a belt reaching his feet (depicted as a waistcoat in Ganondorf's case). Ganondorf also shares Demise's title, the Demon King. In the conclusion of Ganondorf's first level in the story mode, Ghirahim also notes the similarities between Ganondorf and Demise. During the DLC story Cia's Tale, Ghirahim will also sense his master's presence in Cia (who was possessed by Ganondorf at the time), and express confusion as Demise was currently with him as the Imprisoned. Additionally, Ganondorf's Level 3 weapons are the Swords of Demise and his unlockable Twilight Princess Pack DLC outfit, Standard Armor (Twilight) is a Demise inspired recolor of Ganondorf's Standard Armor.

Ganondorf's Level 3 weapon in his Trident moveset is called the Trident of Demise which features a design similar to both Demise's Sword and the Swords of Demise. 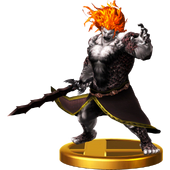 Demise appears as a Trophy and is part of the Skyward Sword Trophy Box.

"Demise" is a word that refers to the the end of something, usually a life. 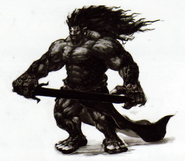