Zeldapedia
Register
Don't have an account?
Sign In
Advertisement
in: Final bosses, The Legend of Zelda: Skyward Sword bosses

This page is about the boss. For the character, see Demise.

"The hate for the gods that has boiled in my veins... you shall taste all of it in the bite of my blade. The only question left is how long will you manage to remain standing before I take your life. Try to keep it interesting for me, will you?"
— Demise

Demise is the final boss of The Legend of Zelda: Skyward Sword. He is fought in a strange realm of water and smoke found beyond a portal in Hylia's Realm; in this realm, the Skyward Strike technique cannot be used.

The battle against Demise is divided into two phases; both are fought as one-on-one duels. In the first phase, when attacked Demise will parry the first two to three sword strikes before suffering damage, at which point he will attempt to counter-attack Link. Demise also attacks by punching Link, and will charge at Link if he's far away. Demise's charge attack is most dangerous as it can take out two hearts. The Shield Bash technique is useful for warding off his sword attacks, often leaving an opening in Demise's defense for an attack as a result of the recoil incurred on him.

One useful tactic is to wait until Demise punches, use a Shield Bash to repel it, and strike quickly for some damage. Because Demise will punch at Link it is recommended that Link has the indestructible Hylian Shield with him in case he fails to use the shield bash technique. Since it won't take any damage from Demise's punch, this will make the fight easier, as Link won't be running around without any way to defend himself. If his parry is broken, and the Shield Bash is quickly used to stop his counter-attack, he can be damaged as well. After suffering several strikes in a row, he will be momentarily stunned, allowing more chance for attacks.

Additionally, if Demise is hit with two Spin Attacks in quick succession, he will fall to his knees and will be open for some additional damage before he is able to recover. Humorously, continuing the tradition of using a lesser item against a final boss, if Link pulls out his Bug Net, Demise will stop attacking; however, this does not work during the second phase of the battle. After Demise suffers enough damage, the second phase of the battle begins.

After falling to the ground, Demise will use his power to summon forth a mighty thunderstorm. Demise is able to mimic the Skyward Strike, storing lightning in his sword by holding it aloft. This makes close combat risky, as any contact made between blades is going to electrify and damage Link. Offensively, Demise delivers both electrified strikes up close and round disks of electrical energy similar to the Skyward Strike; after a few such attacks, his sword will lose its electrical charge, at which point he must recharge. Approaching him while he holds his sword aloft causes Link to suffer extensive damage from the lightning surge. It is recommended that Link not take an Iron Shield or any of its upgrades into this battle, as they will not defend Link from Demise's lightning attacks.

Although it is possible to defeat Demise with close combat, this will very likely result in massive damage being dealt to Link; if this strategy is to be used, it is advised that he has healing items at his disposal. Note that Link should not get too far away from Demise or he will charge Link while he is trying to drink the healing item, however still maintain a safe distance as he can still hit Link thus losing some hearts and stopping the effect of the item. When attacking in close combat with a charged sword, Demise will strike several times in quick succession; with good observation and timing, Link can Shield Bash each of these strikes and counterattack briefly when Demise finishes his attack cycle. This only leaves room for one counterattack though, as Demise recovers quickly from his attack and will hold up his electrified sword to defend himself.

The most prudent technique, however, is to beat Demise at his own game by holding Link's sword above his head, as he would if were to charge a Skyward Strike. This will cause Link to absorb the lightning into his sword instead of Demise, which can be unleashed to momentarily stun Demise, leaving him vulnerable to multiple sword strikes. However, charging the lightning poses a risk in itself as Demise is very likely to charge against Link - it is very likely that a successful stun will leave Demise right in front of Link, leaving no room to follow-up on error. If Demise is close enough during this attack the lightning strike will be ineffective and Link is momentarily unable to dodge. Another viable strategy is therefore to reflect Demise's lightning discs back at him by swinging the Bug Net - it should be noted that the shield will do nothing to protect Link from the disc. As he is unable to send them back at Link this guarantees a hit and Link can quickly strike him down.

Once he has sustained enough damage, Demise will be knocked onto his back, allowing for a chance to land a Fatal Blow; if Link misses, Demise will recover, forcing Link to damage him some more - one will never land, regardless of how fast it is performed. If the Fatal Blow connects, however, the battle is won. Unlike most Fatal Blows, this one is far more theatrical, as Link will perform a double corkscrew into the air, with a bolt of lightning striking down and charging the Master Sword mid-leap, a split second before connecting with Demise. 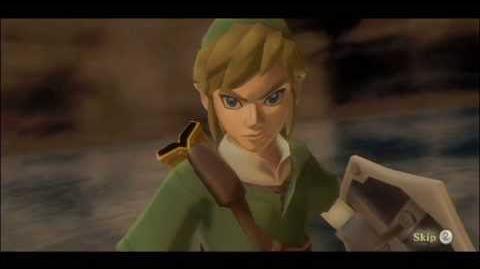