"While you two were busy obtaining the Bow of Light, I have been searching for the Demon Train. That's the train that Malladus used to escape. But he and Cole have hidden it too well..."
— Anjean

The Demon Train is a boss from The Legend of Zelda: Spirit Tracks. It is a massive, semi-sentient locomotive fought in the Dark Realm, directly before the final fights with Chancellor Cole and Malladus.

Cole later uses the Demon Train to engage battle with Link and the Spirit Train. The heroic engineer proceeds to systematically destroy the evil train's cars before critically damaging the engine itself. In a last desperate attempt, the demon train moves to the tracks Link is on and charges forward. Link then has to shoot maniacally to take it down. Following its defeat, the Demon Train slows to a stop and serves as the battlefield for the fight against Cole and Malladus. When Link manages to shoot a Light Arrow into Malladus, a strong surge of magic overwhelms him. The Demon Train takes the full brunt of the energy, and after an anguished roar, the tracks underneath it vanish, and the train begins to explode while sinking into the darkness. It jumps out one last time, only to explode entirely. Pieces of its wreckage can be seen in the background of the final battle.

It is important to note that during the battle, the Spirit Train cannot actually pause or reverse; instead, it has four different speeds, reverse being the slowest.

In the first phase of the fight, the Demon Train opens up several slots on its sides and drops explosive barrels onto the train tracks that the Spirit Train is currently using, attempting to force Link to drive into them. Link must use the cannon to shoot the explosive barrels as they emerge from the slots, causing them to explode near the Demon Train, damaging it and destroying the barrel's slot. When all slots are destroyed, the back of the train falls off.

The fight then moves to the second section of the Demon Train. In this phase, doors open on the sides of the Demon Train, revealing lasers. When the lasers show themselves, Link must shoot cannonballs at them, making them overload and explode. A laser is destroyed when it is hit by two cannonballs. Every laser must be destroyed before this section of the train falls off.

In the final phase of the fight, several large cogs with eye-like designs on them appear. When the cogs stop turning, the eye designs shoot lasers at the Spirit Train. The eyes that are shooting lasers must be shot with the cannon. This causes the Demon Train to slow down, allowing Link to pass it and shoot its face. This is repeated until the Demon Train is defeated. 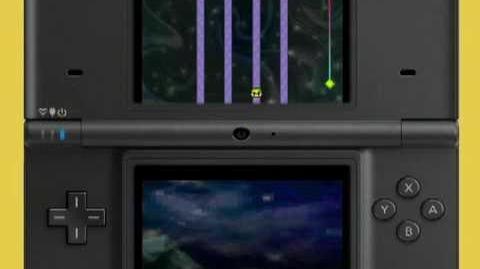 The train's trophy in Super Smash Bros. for Nintendo 3DS / Wii U makes reference to it's face looking familiar.

The locomotive/demon may be based on the C62 2, a locomotive from Japan of a 4-6-4 wheel arrangement without a funnel and with cogs rotating around the boiler and the two tenders are based from the Flying Scotsman.

Retrieved from "https://zelda-archive.fandom.com/wiki/Demon_Train?oldid=543014"
Community content is available under CC-BY-SA unless otherwise noted.