Jaws
Spurts of poisonous liquids from the main head

Twilit Parasite, Diababa (覚醒寄生種 ババラント, Kakusei Kiseishu Babaranto?, Awakening Parasitic Species Babarant) is the boss of the Forest Temple, the first dungeon in The Legend of Zelda: Twilight Princess. Diababa is a giant three-headed Deku Baba, corrupted by Twilight, that has taken over the forest temple. Once it has been defeated, Link receives the first Fused Shadow as well as the first full Heart Container.

The battle begins with Diababa having two very large Deku Baba heads. After Link defeats the pair by flinging Bomblings in their mouths via the Gale Boomerang, Diababa's central head emerges from the pool of water in the room, removing the previous source of the Bomblings. At this point, Ook starts swinging between platforms holding Bomblings, which Link can grab and thus use to hit Diababa by using the Gale Boomerang. After Link strikes his opponent, Diababa becomes stunned temporarily and its head falls to the floor with its jaws open, exposing its eye to sword attacks. After it recovers from its stupor, Diababa will counterattack with a spray of acid. Link must repeat this stun-and-hit process until Diababa is defeated, or until he can use the Ending Blow as a killing move. Link can also hit Diababa's two secondary heads again to temporarily stop the creature from attacking him, though there is little point in doing so as they will regenerate shortly after.

In Diababa's death scene, it thrashes around, shrivels up, and its eye falls out of its socket and explodes, leaving a Heart Container where it used to be. Its body then explodes into particles of twilight, which then come together to form the first part of the Fused Shadow. 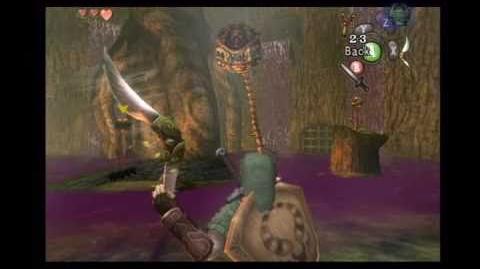 Diababa's English name is formed from the prefix di- or dia- (meaning two) and the latter part of the Deku Babas' name. This could be referring to its appearance as a two-headed Deku Baba. It could also come from the Greek word for devil, diabolos.

Diababa bears a striking resemblance to the Toho kaiju, Biollante from the 1989 film Godzilla vs. Biollante. It is possibly that Diababa's appearance may have been inspired by Biollante's.