The Diabolical Cubus Sisters (地獄四姉妹 キュバス, Jigoku Yon Shimai Kyubasu?, Hellish Four Sisters Cubus) are collectively a boss from The Legend of Zelda: Phantom Hourglass. They are a group of sisters who initially appear to be four women held captive on the Ghost Ship. When Link rescues the first sister, he is tasked with finding and bringing each of the lost sisters back to the first. Only after the four sisters are reunited do they reveal their true colors and engage Link in a match of Dead Man's Volley. They are unusual bosses in that they do not battle Link immediately. Moreover, there is no unique weapon found in the dungeon to pinpoint and attack their weakness.

Interestingly, the Diabolical Cubus Sisters bear an uncanny resemblance to the Poe Sisters from the The Legend of Zelda: Ocarina of Time.

If Link does not take the Heart Container that is left behind after the Sisters are defeated, he cannot get it from the chest again, since the Ghost Ship cannot be revisited. In this case, the Postman delivers it to Link instead; however, if Link also rejects the delivery, he cannot obtain the Heart Container for the rest of the game.

Despite their age differences, the four sisters are outwardly identical to one another, distinguishable only by the color of their cloaks. From youngest to oldest, the sisters' cloaks are red, purple, yellow, and green. Each sister shows an apparent phobia of spiders and screams loudly if in the proximity of one, drawing the attention of any nearby Reapling. Furthermore, while being lead by Link, the three older sisters tend to stop and huddle on the floor if he continues far enough ahead that the sister is off-screen.

The sisters offer misleading advice to Link, encouraging him to open a Treasure Chest that contains a Rupoor and sometimes spawns another Reapling, as well as telling him to avoid shooting the backs of Reaplings with arrows, which would momentarily stun the Reapling. Once all four sisters reunite, they reveal themselves as the Diabolical Cubus Sisters and force Link to battle them on the deck of the ship.

For the entirety of the battle, the sisters float above Link and send down an array of projectile attacks at him or between each other. The only way that Link can damage them is by repelling the glowing energy balls they discharge with his sword. Three of the sisters shoot laser beams at Link while the remaining sister releases the concentrated ball of energy. After a sister has been hit twice with an energy ball, she is destroyed.

After three sisters are eliminated, the final sister draws closer to Link and releases an attack containing an energy ball and two non-deflectable projectiles. After the final sister has been hit three times, she congratulates Link and gives him the Ghost Key and reluctant respect. 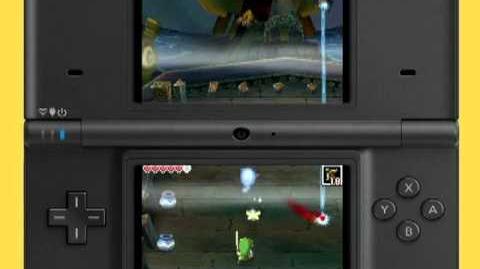 Only one Cubus Sister appears on the Ghost Ship, and is first depicted in the past as the one who turned the crew into Reaplings. When Link first encounters her, she tries to trick him as well, but Linebeck, having seen her before, is not fooled. The sister reveals her true form and taunts Linebeck about his past, but Link interrupts her. She then engages Link in a game of Dead Man's Volley before she strikes Tetra's statue, releasing the spirit of Princess Zelda, who blasts her with magic, enabling Link to deal the finishing blow.

The Cubus Sisters' names are likely a reference to the evil mythical creature, the Succubus, a Demon that resembles beautiful women or girls to mislead and betray men before draining away their lifeforce.