Zeldapedia
Register
Don't have an account?
Sign In
Advertisement
in: Articles with non-canonical information, Articles incorporating theory, The Legend of Zelda: Ocarina of Time dungeons
English

"The Gorons had been blocked from their favorite rockeries ever since King Dodongo appeared and moved into the cavern. Only when Link threw a bomb at the entrance to the cavern did hope reappear on the faces of the Gorons."
— Nintendo Power Player's Guide description

Dodongo's Cavern (ドドンゴの洞窟, Dodongo no Dōkutsu?) is the second dungeon in the youth portion of The Legend of Zelda: Ocarina of Time. As its name suggests, Dodongo's Cavern is home to Dodongos and other lizard-like beasts. Dodongo's Cavern is found about halfway up the Death Mountain Trail, however, upon Link's arrival it is blocked by a boulder. Large quantities of Bomb Flowers grow inside the cavern due to its favorably dark and muggy environment.

For a long time, Dodongo's Cavern served as a quarry and was the primary source of food - minerals and rocks - for the Gorons. However, greedily seeking the Goron's Ruby, the Spiritual Stone of Fire, the Gerudo mystic, Ganondorf, sealed the entrance with a boulder in an attempt to weaken the Gorons and blackmail them to gain control of the stone. That, along with King Dodongo stationed there as additional hindrance, the Gorons were deprived of sustenance and their leader, Darunia, went into solitude, taking with him the Spiritual Stone.

Eventually, the hero Link, on a journey to gather the Spiritual Stones and stop Ganondorf from bringing chaos and ruin to Hyrule enters Goron City only to find the Gorons in need of aid. Link plays "Zelda's Lullaby" on his Fairy Ocarina, a song known only to those closely trusted by the Royal Family of Hyrule and the door to Darunia's throne room opens. Darunia is seemingly unimpressed with the Royal Family sending only a small child to his aid, however, Link plays "Saria's Song", and Darunia's sense of despair is momentarily whisked away at the sound of the cheerful tune. He entrusts Link with the Goron's Bracelet, which grants Link the strength to make use of Bomb Flowers.

Link destroys the boulder blocking Dodongo's Cavern using the ability of the Goron Bracelet, and journeys into the Dodongo infested cave, destroying the creatures and overcoming the obstacles in Dodongo's Cavern and eventually encounters and defeats King Dodongo. Upon his return, Darunia proclaims Link his sworn brother and presents him with the Spiritual Stone of Fire, the Goron's Ruby. Link may thereafter return to the cavern both as a child and as an adult. 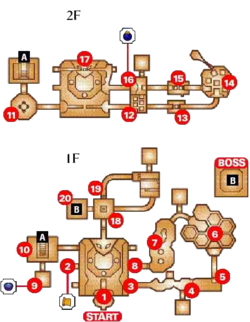 In order to gain access to the cavern itself, Link has to destroy a boulder using a bomb flower thrown from the cliff above. Inside the cavern, Link is faced with a host of monsters and enemies, including Beamos, Keese, Baby Dodongos, Dodongos, Armos, and Lizalfos. There is also a Business Scrub from whom Link can buy a Deku Shield, should a Fire Keese burn his away. On many occasions, Link must use a Bomb Flower in some way to continue through the cavern. Eventually, he discovers a Bomb Bag, which enables Link to carry his own supply of bombs, rendering the Bomb Flowers obsolete. Equipped with this new item, the hero is able to journey deeper into the cavern through the mouth of a Giant Dead Dodongo and works his way through to the innermost portions of the complex. At the end of this section of the cavern is a room with a small section of unusually weak ground. Link bombs this section of the floor, opening a hole that drops into the lair of King Dodongo.

Unlike Inside the Deku Tree and Inside Jabu-Jabu's Belly, this Young Link dungeon can also be entered by Link as an adult. A few extra areas require Adult Link's equipment and will often contain additional Golden Skulltulas.

In the Master Quest re-releases, several changes have been made to the dungeon, including puzzles such as the inclusion of a room with Silver Rupees and the order in which rooms are visited, most noticeably the first two sections of the dungeon which are visited in reverse order. The main task of the dungeon is still to find a Bomb Bag and Bombs necessary for opening the mouth of the Giant Dead Dodongo, but the Bomb Bag and Bombs are found in a different location. There are also several new enemies such as Mad Scrubs, Gohma Larva, Poes and Skulltulas.

Oddly enough, Dodongo's Cavern may be known to the Gorons of Termina, as one Goron in the Mountain Village describes the food Goron Link gives him as "Dodongo Cavern's finest quality Rock Sirloin!" Whether this refers to Hyrule's Dodongo Cavern or an unseen parallel location in Termina is unknown. One possibility is that the Hidden Hole found near the entrance to Snowhead that contains two Dodongo could be Dodongo's Cavern's Terminan equivalent (as it is a cavern inhabited by Dodongos) albeit one that is much smaller in size.