"A mysterious rod with the ability to command stone statues. Use a Strong Attack to control a statue and then lead it to battle with Combo Attacks."
— In-game description

Dominion Rod is a weapon moveset used by Princess Zelda in Hyrule Warriors. It is described as a mysterious rod with the ability to command stone statues. Its Strong Attack allows Zelda and summon and control a statue, leading it into battle with Combo Attacks. It has a Darkness Elemental Attribute. During certain combos and attacks, Zelda can use the Control Orb at the top of the rod to attack enemies with. During her Focus Spirit Attack, Zelda summons a giant Owl Statue to attack enemies with. During her standard weak point attack, Zelda will pass the Control Orb from the rod to an Owl Statue and they will pass it back and forth briefly, then Zelda will finish by spiking the Orb into the ground. Both statues are used in Zelda's Boss Weak Point Smash.

Zelda can summon two types of Statues with her Strong Attack. A certain combo allows her to switch between the two. The two Statues are: 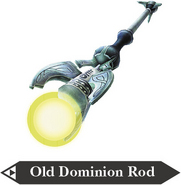 Promotional Render of the Old Dominion Rod from Hyrule Warriors 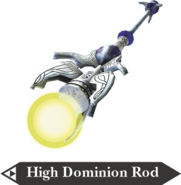 Promotional Render of the High Dominion Rod from Hyrule Warriors 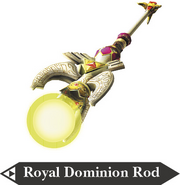 Promotional Render of the Royal Dominion Rod from Hyrule Warriors 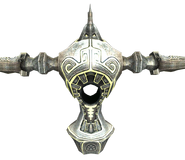 Render of the Hammer Guardian Statue model from Hyrule Warriors

This moveset is based on the Dominion Rod used by Link Twilight Princess. Zelda's use of it is a reference to item's backstory from Twilight Princess, when Oocca where still in contact with the Royal Family of Hyrule, the Oocca handed down the Dominion Rod, also known as the rod of the heavens. This rod was only to be carried by one known as the messenger to the heavens and used by the messenger whenever the Royal Family needed to communicate with the Oocca. Zelda's use of the rod may also be a passing reference to the rod-like staff wielded by her counterpart Princess Hilda (who appears as a Recolor Costume for Zelda).