"You got another Clawshot! Combined with the one that you already have, they're called the Double Clawshots! Hold them with Y or X, aim with the control stick, and release the button to fire. Use it while hanging on to another spot to fire again!"
— In-game description

The first Clawshot is found in the Lakebed Temple, and the other is found within the City in the Sky after defeating an Aeralfos. After Link receives the second Clawshot, the two Clawshots become one item. The Double Clawshots can be used to retrieve distant items such as Rupees and hearts. If Link is in a hanging position, he can raise or lower himself, allowing him to fire the other Clawshot from a better angle. Link can also equip the Iron Boots while hanging from a Clawshot to pull down certain objects.

In Skyward Sword, the Clawshots is the second of the Three Sacred Gifts left by the Goddess Hylia to aid Link in his quest to find the Sacred Flames. Link receives the Clawshots after completing the Silent Realm found in the Lanayru Desert. They diverge from their previous incarnation in that they can no longer retrieve distant objects (as the Beetle and its upgrades already serve that function), and cannot lower him from a hanging position. However, unlike in Twilight Princess, Link may use the Clawshots even as he is clinging to vines. They also possess the ability to defeat smaller enemies, but very often the slow speed of the claw means it is difficult to aim. 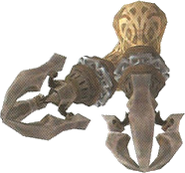 The Double Clawshots from Twilight Princess