This article is about the moveset. For the material, see Volga's Dragon Spear.

"An exquisite spear, carved from the bones of a dragon, it channels fraction of the great beast's might. Use a Strong Attack or a Combo Attack after evading to break the enemy's guard."
— In-game description

Dragon Spear is the default weapon moveset used by the Dragon Knight Volga in Hyrule Warriors. It is described as an exquisite spear carved from the bones of a dragon, allowing it to channel a fraction of the great beast's might and as a result, it has a Fire Elemental Attribute.

Using a Strong Attack or a Combo Attack after evading allows Volga to break an enemy's guard. As part of his moveset, Volga can transform himself into a Dragon. He can also transform his left arm into the claw of a dragon or grow dragon wings out of his back during his weak point attack and Focus Spirit attack. Volga can also breathe fire in both his humanoid and dragon forms. He can also transform into his dragon form during his Focus Spirit End Attack then fly around in circles creating a circular trail of fire before performing a pounce attack on the ground damaging nearby enemies.

Promotional Render of the Dragonbone Pike from Hyrule Warriors

Promotional Render of the Stonecleaver Claw from Hyrule Warriors 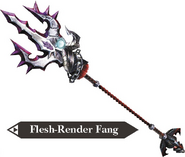 Promotional Render of the Flesh-Render Fang from Hyrule Warriors