Have an image of this song?
Then please upload it!

The "Elegy of Emptiness" (ぬけがらのエレジー, Nuke-gara no Erejī?, Elegy of Exuvia) is a song from The Legend of Zelda: Majora's Mask. After Link defeats Igos du Ikana and his two guards in the Ancient Castle of Ikana, the King admits defeat and teaches the victor this song. When played, this song creates an inanimate statue or "clone" of Link. Link can use this while standing on a switch to keep it pressed down while he moves on. The song can create one statue for each of Link's alternate forms, with the exception of the Fierce Deity, who cannot play an instrument. However, this song only works within the area of Ikana.

The statues created are different in appearance to what Link looks like while in one of the forms. The Deku Scrub statue looks very similar to the twisted tree seen at the beginning of the game, while the Goron and Zora statues look like the people who Link received the masks from; the Goron hero Darmani and the Zora guitarist Mikau, respectively. Finally, his Hylian statue looks like a distorted effigy of Link himself. The Goron statue can hold down switches requiring a heavy weight, while the Deku Scrub statue is virtually useless as it is too light to depress any switches. The Elegy of Emptiness is needed to traverse Stone Tower and a room in Stone Tower Temple.

The statue created by Deku Link 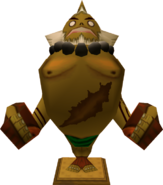 The statue created by Goron Link

The statue created by Zora Link
Add a photo to this gallery
Retrieved from "https://zelda-archive.fandom.com/wiki/Elegy_of_Emptiness?oldid=526786"
Community content is available under CC-BY-SA unless otherwise noted.