"Go forth and slay the monster that broke the king's rest."
— Max

Ancient Stone Soldier: Eox (古代巨岩兵 オーイス, Kodai Kyōganhei Ōisu?, Ancient Giant Rock Soldier: Eox) is a boss from The Legend of Zelda: Phantom Hourglass. A giant machine, apparently built for protection or war for the Cobble Kingdom, it has been wreaking havoc, angering King Mutoh. This lumbering giant serves as the boss of Mutoh's Temple and is the guardian of the third Pure Metal, Aquanine.

During the first phase of the battle, Eox has three different attacks. Eox can shoot arrows from its mouth, allowing it to hit Link at a distance. Eox can also either stomp with its foot or use its fist to pound Link. These two attacks create a yellow shock wave that causes damage to Link. Ten red bolts placed on the joints of its body serve as Eox's weakness and targets for the Hammer. In order to reach Eox, however, Link must must slam down on one of the four catapult tiles located throughout the room to launch him within hitting range of one of the red weak points. After a weak point has been hit several times, the stone around that area falls away, revealing a wooden framework.

After every red bolt has been hit, four more red bolts appear on Eox's wooden frame. Eox's attacks remain the same in the second phase. To destroy the frame, Link must hit all four bolts while he is in the air with the hammer and must time it well, because Eox may bend over and attack before being allowed to hit the last four bolts; if any are missed, the hit bolts regenerate. When a bolt is hit, the color changes from red to blue. An easy way to complete this phase is to wait on one of the launch pads for Eox to bend over, and then slam the down on the launch pad right as Eox stands again, leaving him completely vulnerable to a hammer attack to the four bolts.

When Link hits all four bolts, Eox's wooden frame collapses, leaving its hopping head. Eox still has the ability to shoot arrows. It can shoot six arrows, two in front and two for both front diagonals. Eox's head moves around by hopping to traverse a distance and spinning to change directions. To finish off Eox, Link must land on its head and attack the blue crystal with the Hammer or his sword. While on Eox's head, Link can be shaken off. 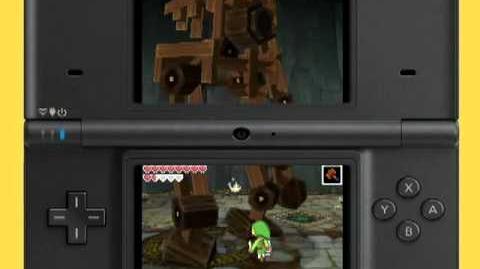 Eox bears striking resemblance to Golemech, a boss from Star Fox 64. Aside from the idea that they look similar and are the remnants of lost civilizations, they are also both defeated in a similar fashion, crumbling away to reveal weak spots. Because of this, it is possible that Eox was inspired by Golemech.