Zeldapedia
Register
Don't have an account?
Sign In
Advertisement
in: The Legend of Zelda: Oracle of Ages bosses
English

Eyesoar (パタラ, Patara?) is the boss of the Skull Dungeon, the fourth dungeon in The Legend of Zelda: Oracle of Ages. It guards the Burning Flame.

Eyesoar is essentially a floating eye with wings. It also has four smaller versions circling itself. They may drop hearts when defeated, which is easily done since it takes a single swipe to accomplish. Eyesoar attacks by trying to hit Link with its body, much like most monsters in the Legend of Zelda series.

To defeat Eyesoar, Link must grapple it with the Switch Hook, then slash it with his sword. 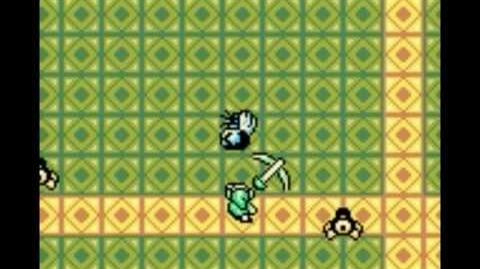 "Eyesoar" is a portmanteau of eye and soar, evoking its physical appearance, as it is a flying eyeball. Eyesoar is also phonetically identical to eyesore, which means something unpleasant to look at.