Façade (マットフェイス, Matto Feisu?, Mat Face) is the Nightmare and boss of Face Shrine, the sixth dungeon in The Legend of Zelda: Link's Awakening. Façade is a disembodied face that attacks Link with Flying Tiles. During the battle with Façade, it inadvertently reveals its weakness to Bombs. After being defeated, it reveals to Link that the Wind Fish waking up will result in the demise of Koholint Island.

The only way to damage Façade is with Bombs. If it runs out of tiles, first it will fling any pots that are available, and will then cause holes to appear at random points in the floor. Defeating it when there are any "possessed" tiles or pots in play will cause them to self-destruct and almost always leave behind a Rupee or Heart. After it is defeated, Link can obtain the Coral Triangle. 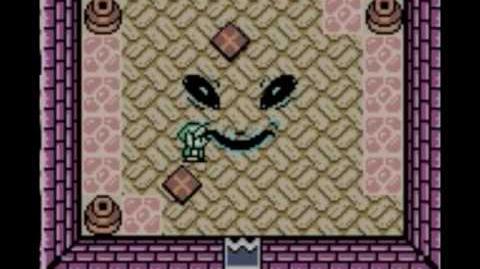 Façade's name comes from the English word of the same name, meaning "the face of a building, esp. the principal front that looks onto a street or open space," or "an outward appearance that is maintained to conceal a less pleasant or creditable reality." Its name obviously refers to its appearance as a face.

Retrieved from "https://zelda-archive.fandom.com/wiki/Façade_(Link%27s_Awakening)?oldid=542618"
Community content is available under CC-BY-SA unless otherwise noted.