"When Cia opened a portal to Skyloft, the fabled city in the sky, she never intended to gift the Hero both a weapon and an ally at the same time, yet this came to pass. Fi, the spirit that inhabits the Goddess Sword, is an unusual being. Gifted with acute analytical senses and lengthy battle-related knowledge, Fi proves herself vital to any conflict. Despite being a sword and a literal weapon, Fi possesses amazing grace and dancing ability. Watching her dance in the face of her enemies is a truly mesmerizing sight to behold."
— Fi, Spirit of the Sword Historical Entry Tutorial Bio

) is a playable character in Hyrule Warriors and Hyrule Warriors Legends. The sentient spirit of the Goddess Sword, Fi is both a warrior and a weapon, created by the Goddess Hylia and placed in a hidden chamber located under the Statue of the Goddess located in Skyloft. When Skyloft is transported into the skies of Hyrule by the warping of time and space, Fi joins that Era's incarnation of Link in fighting to restore order and defeat the evil that threatens her Era. 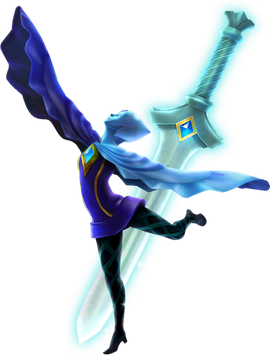 As the spirit of the Goddess Sword, Fi can summon the power of the Sacred Flames and sing to create a Trial Gate to attack enemies. Though she lacks arms, she possesses a mysterious, telekinetic power that allows her to pick up, throw, and use items. Her fighting style is based on dancing, which, due to her lack of arms, revolves around her using her legs to perform dance-based kicks.

Fi's true form is that of the Goddess Sword, which she can transform into to effectively wield herself in combat. In her sword form she can fly around and swing her blade to attack enemies. By raising her blade skyward, she can infuse herself with light energy, She can also summon a Goddess Crest which she can activate with a Skyward Strike as her Focus Spirit Attack. During her special attack, she slams her blade into the ground to produce a circular seal like the one used to reseal The Imprisoned in The Legend of Zelda: Skyward Sword.

Dark Fi is a shadowy Doppelgänger of Fi that appears as an enemy in Adventure Mode. She uses the same moveset and drops the same Materials as Fi. 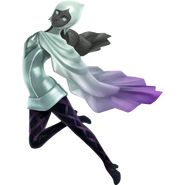 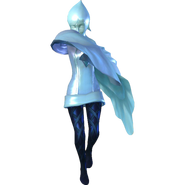 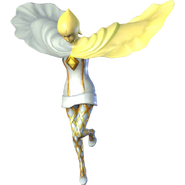