Zeldapedia
Register
Don't have an account?
Sign In
Advertisement
in: Articles with non-canonical information, Arrows, The Legend of Zelda: Ocarina of Time items,
and 6 more
English

"You got the Fire Arrow! Set it to (C) and your arrows will be powered up! If you hit your target, it will catch fire."
— In-game description

Fire Arrows (炎の矢, Honō no Ya?) are recurring items in the Legend of Zelda series. As their name implies, Fire Arrows are arrows enchanted with fire that damages enemies and immolates certain objects. Makeshift Fire Arrows can be created by shooting an arrow through a torch, even in games that do not feature Fire Arrows as a item.

Fire Arrows are one of three special arrow types Link can obtain for the Fairy Bow. Each Fire Arrow deducts a small amount of magic from Link's Magic Meter. When a Fire Arrow hits its target, it momentarily bathes the impact point in flames. This makes it quite useful for lighting torches and melting ice, as well as for dealing significant damage to enemies. Fire Arrows are particularly useful in areas where Din's Fire cannot reach, such as a far-off torch. While Fire Arrows make it easier for Link to progress in certain areas, they are not required to complete the game.

Fire Arrows are obtained by firing a regular arrow at the rising sun while standing atop a platform above the island housing the Water Temple in Lake Hylia. If done correctly, the Fire Arrow will appear on a distant landmass with two pillars. This process will yield a Magic Jar if repeated. The landmass may be reached by swimming to its location, though this can only be done once the Water Temple has been completed and water restored to the lake. As an alternative, Link can play the "Scarecrow's Song" in order to summon Pierre, who can then be used as a Longshot target as a means of transport.

Fire Arrows are similar both in appearance and function to those from Ocarina of Time. One of the special arrow types Link can obtain for the Hero's Bow, they are found in Snowhead Temple after the defeat of the mini-boss Wizzrobe, and are needed to begin the battle with the dungeon's boss, Goht.

After Link learns the "Ballad of Gales" and Tetra's true identity is revealed, he can travel to the Mother & Child Isles on a cyclone and speak to the Queen of Fairies, who gifts him with both the Fire and Ice Arrows. Fire Arrows are used to gain access to Ice Ring Isle, where the Iron Boots are found. They can also be used to light torches and burn away wooden barriers, as well as to melt ice barricades or free enemies encased in ice. Additionally, they are powerful even against tougher enemies—notably, winged Mothulas, which can be defeated with a single Fire Arrow. Enemies knocked back by a Fire Arrow will set other enemies on fire if they come into contact with them while falling backward.

Fire Arrows do not appear as items in Twilight Princess, but Link encounters Bulblins that shoot flaming arrows, which will burn the Ordon Shield or the Wooden Shield.

Fire Arrows do not appear as items in Skyward Sword, but Link encounters Bokoblin Archers who shoot flaming arrows, which will set fire to the Wooden Shield or any of its upgrades.

"An arrow imbued with the power of fire. It breaks apart on impact, igniting objects in the immediate area. It's incredibly effective against cold things."
— Hyrule Compendium

Fire Arrows are similar both in appearance and function to those from Ocarina of Time and Majora's Mask. Link can find a bundle of five Fire Arrows in several Treasure Chests of the Great Plateau. He can also purchase them at The Curious Quiver in Kakariko Village, Goron Gusto Shop in Goron City, and the Arrow Specialty Shop in Gerudo Town. The traveling arrow merchant Botrick who travels alone the roads near Outskirt Stable and Coliseum Ruins also sells Fire Arrows. The traveler Tye will occasionally give Fire Arrows to Link as a reward for rescuing him and his wife Sorelia from monsters.

As with past games, standard arrows become makeshift fire arrows when exposed to fire or volcanic heat. However unlike past games, Link doesn't have to shoot them as he can simply set an arrow and have it pass through a nearby flame or Blue Flame while set or drawn. However Link must be careful as burning arrows eventually burn up. Link can however utilize them as makeshift torches to light objects on fire or carry a flame allowing him to conserve regular Fire Arrows. Volcanic heat automatically turns all wooden arrows into burning arrows, and rain will extinguish them.

Link can briefly charge a ready arrow. When shot, fire appears to surround it. Opponents cannot block this shot.

In the development of Twilight Princess, Fire Arrows originally appeared as an item, presumably back when Twilight Princess still had a magic system. However the removal of the magic system would of likely effected how Fire Arrows would be implemented in-game (basically requiring the developers to create an entirely new way for Fire Arrows to function without magic, which later occurred in Breath of the Wild) or it was decided to scrap them in favor of Bomb Arrows. However it still exists in the game's code and can be unlocked with a GameShark cheat.

Toon Link utilizes Fire Arrows as an alternate customization moves for the Hero's Bow in Super Smash Bros. for Nintendo 3DS / Wii U. They have less range than standard arrows but deal fire damage and continue to burn on the ground when fired. 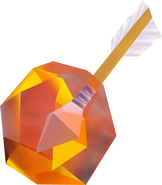 Render of a Fire Arrow from Ocarina of Time & Majora's Mask 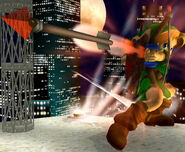